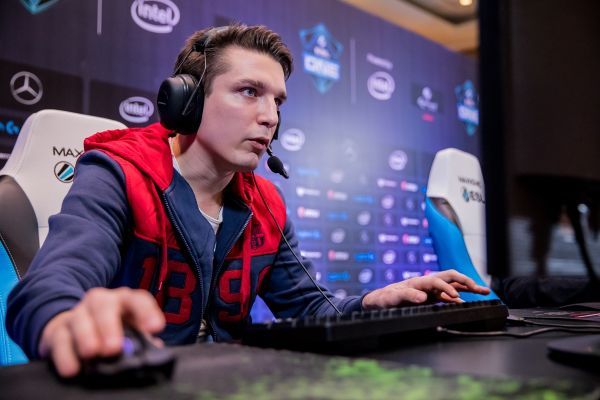 Mag's original DotA nickname was Magus; he later changed it to avoid confusion with hero Magnus. Mag played for various Ukrainian teams with his friend Deff-, they both got picked up by Natus Vincere along with Goblak, Axypa and XBOCT to form the first DotA team under this tag. Later both of them got kicked, and replaced by Dendi and Artstyle.

Mag played with Darer in The International 2012 but were eliminated in the second round of the losers bracket. On September 12th, 2012 the entire Darer squad was replaced with a Bulgarian line-up, citing communication problems.[1]

Mag played with Team iCCup on March 14th, 2013 where he made a name for himself along with his teammates Resolut1on, ALWAYSWANNAFLY, wejustzik and Jackal. Despite showing great results and a potential to grow, the team was released on August 16th, 2013 and left without sponsors.[2] The team continued to play under the name Terrible Terrible Damage, although Resolut1on was picked up by Virtus.pro very quickly. Under Mag's guidance, Terrible Terrible Damage took a convincing win in the offline tournament Techlabs Cup 2013.

Not long later, on September 2nd, 2013 Mag joined Team Empire as an offlaner in the post-TI3 reshuffle.[3] He was joined several days later by his former teammate ALWAYSWANNAFLY. With Team Empire Mag showed impressive results and took over as team captain after LighTofHeaveN left to join Virtus.pro.

Empire's run with Mag as a captain culminated in taking second place at Star Ladder Star Series Season 9, losing in the Grand Final to Team DK. After a bad performance at The International 2014, Mag was kicked, since some of his teammates were dissatisfied with his decision making.

Mag played as a stand-in for Cloud9 at Star Ladder Star Series Season 10, since Bone7 couldn't attend the event. Cloud9 managed to get to third place. Due to the fact that Mag played Centaur Warrunner almost exclusively, people started calling him Andrey "Mag" Centavrenko or Andrey "WARRUN" Chipenko.

Mag proceeded to play as stand-in for the Virtus.Pro Polar squad alongside Fng. Later both players were officially picked up by the organization. Mag helped his team take second place at HyperX Dota 2 League Season 5 and Star Ladder Star Series Season 11.

Following some poor performance from both VP squads in the first quarter of 2015, management decided to merge two teams. Mag was kicked, and later replaced by Sedoy. After spending some time teamless, Mag along with Solo got picked up by Vega Squadron. Vega had an impressive run in The International 2015 qualifiers, but ultimately came short, at first losing to Natus Vincere in the final of EU qualifiers, and then to CDEC Gaming and MVP Phoenix in wildcard qualifiers. Despite failing to attend the main event of the biggest tournament of the year, team decided to stick together, and not make any roster changes.

While watching the main event, Mag noticed how impressive was his former teammate DkPhobos with Broodmother. DkPhobos told Mag that he studied this hero under guidance of a top Brood player, L.Kain. Mag contacted the guy, who had over 1000 games on Broodmother at that point, and asked for some tips.[4] New skills came in handy when Vega attended ESL One New York 2015, a tournament they got to through European qualifiers. Despite facing TI5 champions, EG, in the first round, team made it through to the final, where they snatched the cup from Team Secret. Mag's Broodmother was a star of the tournament, being picked by Vega or banned against them in almost every game. Winning the first big LAN tournament since TI5 secured Vega an invitation to the Frankfurt Major 2015.

Vega ultimately fell short of desired result in Frankfurt, only getting to 9th-12th place after losing both games in the main event. Team didn't find much success for the rest of the season, failing to make it to both Shanghai Major and Manila Major. Their biggest achievement was taking second place at WePlay Dota2 League Season 3, where they performed with revamped roster, in which fn replaced 9pasha at carry position. Mag and his teammates also struggled in the most important qualifiers of the year, not getting to desired Top 5 in European qualifiers for TI6. After major roster changes, only Mag and CemaTheSlayer stayed.

Vega results remained poor despite constant roster changes, as they continued to come short at big LAN qualifiers, and in March 2017, a month before 2 year anniversary of being on the team, Mag was kicked and replaced by Afterlife. What followed was a brief period of playing as stand-in for Comanche, new CIS organization, which ended abruptly, as Gambit Esports tried to poach the whole squad, but then decided against it, which left Mag without contract and teamless.[5]

However, life took a surprising turn for Mag, as in May 2017 he moved to South-East Asia and joined Mineski. Him and .Ark, a player he knew from Comanche, became one of the few CIS players to move to other region, and the first ones to compete in SEA. Unfortunately the new roster did not achieve the desired results. After failing to qualify for The International 2017, Mag was released.[6]

Mag spent most of the next season cycling through teams such as Effect, Planet Dog and Double Dimension. He ended the season with MEGA-LADA E-sports,[7] failing to go through the TI 8 CIS open qualifiers.

At the start of the 2018-19 DPC Circuit Mag was offered a coaching position on Natus Vincere.[8] Mag managed to lead the team to international LAN's such as DreamLeague Season 11 and ESL One Mumbai 2019 where they would achieve mixed results. At The International 2019 Na'Vi made it to main stage, where they lost to Mineski in a BO1 match, finishing 13th-16th place.