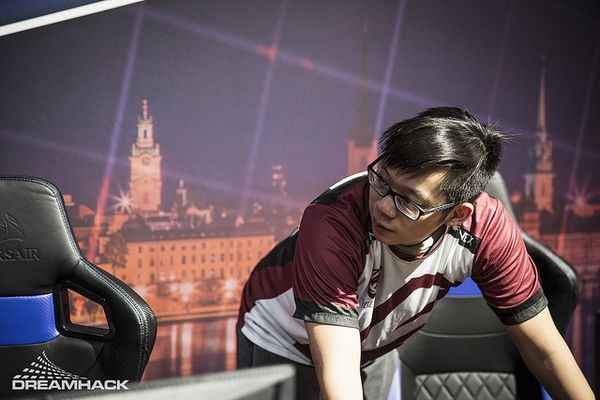 MoonMeander's popularity rose because of his consistent streaming and affiliation with the arguably infamous Dotallyrad organization. MoonMeander was picked up by Tralfamadore to standin for team Trademark eSports at the upcoming NASL Season 2. The team ultimately took 3rd place at NASL, beating out Fnatic 2-1. Shortly after his strong debut at NASL, MoonMeander quickly transitioned from a pubstar to a mainstay of the competitive HoN scene. MoonMeander's signature aggression and go big or go home style of play continued to fuel his ever growing fan base. MoonMeander eventually joined compLexity Gaming's HoN squad and continued to perform at a high level in online and offline events. While dedicating the majority of his time to practice and competition, MoonMeander would still constantly stream for his fans. When the HoN competitive scene began to decline, MoonMeander decided to switch to Dota 2.

MoonMeander formed a team with former coL.HoN teammate Bkid and other past Heroes of Newerth players Bloody Nine, Ensoe and WwD. The team first played under the name Black Sheep, however later renamed themselves Dream Destroyers.

On the 31st of October 2015, MoonMeander and his (monkey) Business teammates formed the organisation OG, bankrolled by Hitbox. After a few weeks of formation, he won the first Valve Major, The Frankfurt Major 2015 and later winning DreamLeague Season 5 into 2016. In valve's third major, The Manila Major 2016, he was featured in a player profile and also won the tournament beating fierce rivals Team Liquid 3-1 in the grand finals. He continued to show success after the major winning, ESL One Frankfurt 2016 and finishing second place at the The Summit 5. However, despite topping group A in The International 2016, OG crashed to an early exit after losing to TNC Gaming in the second round of the lowers bracket and MoonMeander later departed OG to join Digital Chaos as their offlaner [1]

MoonMeander's new team Digital Chaos started the season with middling performances at The Summit 6 and Elimination Mode 2.0, but that didn't stop them from placing in the top four at The Boston Major. Next, they would win ESL One Genting 2017, beating Newbee in a closely contested five game grand finals. However, they struggled to maintain their momentum, losing the Dota 2 Asia Championships 2017 Americas Qualifier to Team NP then placing last at StarLadder i-League StarSeries Season 3. Two weeks before The Kiev Major, the team suddenly left Digital Chaos to play under the independent team name Thunderbirds.[2]

As Thunderbirds, MoonMeander and his teammates placed last at The Kiev Major, beat Team NP in the EPICENTER 2017 AM Qualifier, then lost to Team NP at The Summit 7 American Qualifier. They played under the Thunderbirds team name for about a month and a half before signing with Swedish organization Planet Odd.[3]

Even though the team enjoyed early season success and featured four out of five TI 6 runner ups, they weren't assured a direct invite to The International 2017 due to their recent shaky results. Planet Odd had two last minute chances to secure an invite at EPICENTER 2017 and Galaxy Battles. Unfortunately, they finished just outside of the top three teams in their group at EPICENTER 2017, eliminating them before the playoffs. At Galaxy Battles, Planet Odd performed well, but were beaten by Newbee twice in a 2-1 winners' finals and a 3-0 grand finals sweep. They were not one of the six teams to receive a direct invite to The International 2017.