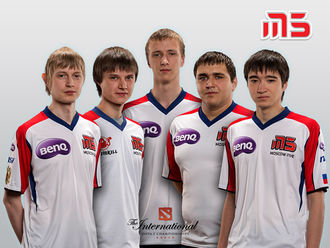 From left to right: Admiraton, Vigoss, BlooDAnGeL, PGG and Silent.

Moscow Five, often abbreviated M5, is a Russian multigaming organization which was founded in 2001. The organization has teams in Counter-Strike, WarCraft, FIFA, and LoL.

Moscow Five is a very unstable team, frequently going through player rosters. In 2012, their team under Vladimir "PGG" Ansonov disbanded, followed by the one led by Igor "Nexus" Lisakovskiy, resulting in the end of Moscow Fives's Dota division on November 1st, 2012. However, on August 8, 2014, they re-entered the Dota 2 scene.