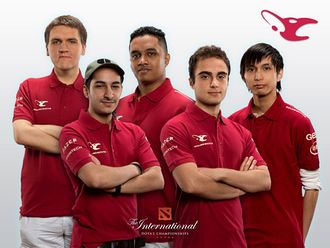 mousesports, often abbreviated mouz, is a German multigaming organization originally founded in 2002 as a Counter-Strike team. Mousesports ran several successful sections, notably on Counter-Strike, Quake 4 and Warcraft III, and was represented by famous players such as Anton "Cooller" Singov, and the late Antonio "Cyx" Daniloski.

mousesports' Dota 2 section was created on December 5, 2011 by picking up players from EBIN.[1] On January 13, 2012 the team picked up SexyBamboe from LowLandLions while placing twiSta in a substitute and management role for the team.[2]

mousesports entered the Dota scene in December 2007, when they picked up "Back to Basics", a team consisting of Milo, Kog, bluTgeiL, PlaymatE, Jacklin, Fragalot, Mirakel and Drayich.[3] They were one of the most successful teams in the European scene during 2008-2009. They won Farm 4 Fame #2 in October 2008, with a roster consisting of Miracle, TwisteD, LevenT, KuroKy and Away.[4] In November 2008, the team moved on to play for Kingsurf.int, and mouz stood without a Dota team.[5] Three months later however, a new Dota squad was picked up. Captained by Drayich, the roster consisted of Swedes and Norwegians, among them SyndereN.[5] Only two months later however, mousesports decided to completely cease operations in Dota, much due to the lack of professionalism in the scene.[6]

Mousesports made their first foray into competitive Dota 2 after The International 2011, when they picked up team EBIN consisting of Rexi, DeMeNt, SingSing, Trixi and twiSta.[1]. Later in October 2012, after several roster changes and a disappointing result at The International 2012, mouz dropped their Dota 2 squad, who went on to play for The GD Studio, as The GD B-Team.[7] However mousesports would re-sign their old team, who were now playing under the name Zero, one month later.[8] mouz would now be an all-German team, consisting of Black^, KuroKy, Alex, FATA-, and paS.

On May 1st 2013, syndereN would return to mousesports, after having played for the team in his Dota 1 days, replacing Alex. As a result, mouz's results improved drastically: together they won several online qualifiers, including the Western Qualifiers for The International 2013, placed highly at several LAN events and even beat Evil Geniuses at RaidCall EMS One Summer Season and Virtus.pro at the Corsair Gaming Summer Tournament 2013. However, success at The International would evade them again. syndereN, who had had disappointing results in the previous TIs, announced his retirement later that year and after a roster reshuffle,[9] mousesports once again released their Dota 2 squad.[10]

In May 2014, mousesports reentered the competitive scene, picking up Team Dog,[11] an international squad, consisting of Former mousesports members FATA- and paS as well as Pajkatt, MSS, and MiSeRy, that had made a name of itself in online tournaments and qualifiers. Team Dog themselves had earned an invite to the European Qualifiers of The International 2014, which they won with a 3-2 victory over Virtus.pro. But a poor result at TI, made this mousesports shortest living squad to date, disbanding only a month after TI, in August 2014.

A year after signing their last roster, mousesports made another foray into professional Dota 2, this time picking up the international squad Team Tinker, made up of players from both North America and Europe. With Team Tinker, two mousesports alumni Black^ and qojqva would return to the organization, alongside BuLba, Waytosexy, and pieliedie. Expectations were high for this new squad, but this time mousesports was not even able to secure a spot at The International 2015, failing in the NA Qualifiers by finishing third behind North American Rejects and compLexity Gaming. Only two months after being signed, the players asked to be released from the team to pursue other options.[12] This would be the last team sponsored by the organization for some time.

After nearly two years of absence from the Dota 2 scene, mouz returns in April 2017 by signing the members of former Ad Finem,[13] who had been playing under the name "The Greeks" after departing their former organization earlier in the year. Their new roster would be an all-Greek team made up of captain and hard support SsaSpartan, roaming support Maybe Next Time, offlaner Skylark, midlaner ThuG, and hard carry Madara. All of them, save Thug and Skylark, had already played together for London Conspiracy in 2014 and Skylark had joined that team in 2015. All five had been playing together as Ad Finem since December 2015.

It's been a while since mousesports took to the lanes of Dota 2 and we are thrilled to be back with this new lineup. Following their miraculous run in Boston which saw them capture the hearts of Dota Fans around the world with their plays and sheer passion, the team decided to continue their path of success with mousesports - at the upcoming major in Kiev and far beyond.
mousesports