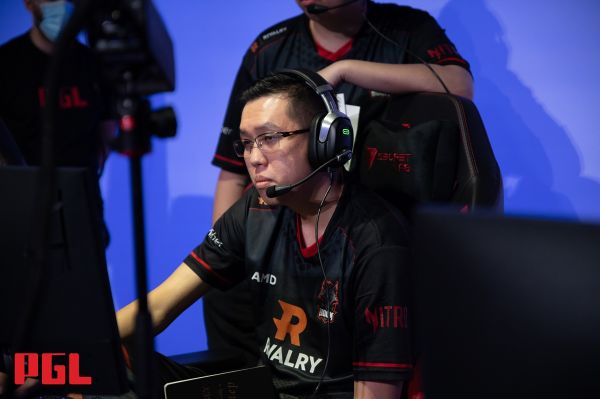 He most famously played for Team DK[1] and for Orange as solo mid or carry, depending on which heroes the team picked.[2]

2011 marked the start of Mushi's Dota 2 career when he officially joined Orange on September 5. Mushi temporarily retired from DotA in 2011, citing fatigue and poor results as the main reasons.[3] Eventually he slowly moved back to a managerial role and then finally rejoined Orange as a player once again. His squad only had one notable win this year at the Malaysia Invitational where they beat MiTH 3 to 2 in a close finals.

Mushi and Orange looked to have a strong showing in 2012. To make sure they really made a splash, they recruited veteran DotA players kYxY, Ice and even the legendary YamateH. Mushi and Winter were the two players to remain on the roster from 2011. Once again, Mushi and Orange began to build up their reputation as one of the best teams in SEA. From January to June, Mushi and his squad were able to win 4 tournaments with the two biggest being The Evolution Malaysia in May and the Razer Invitational Showcase in April. Orange had strong performances in several other tournaments as well.

Valve acknowledged Orange's performance and the team received a direct invite to the biggest Dota 2 tournament ever at that time, The International 2012. Mushi and team were able to place top 4 in their group and got seeded into the winner's bracket where they were swiftly knocked down by LGD.cn who were undefeated in the group stage. Orange showed some signs of life in the loser's bracket by beating Counter Logic Gaming but their run came to an end at the hands of EHOME. Orange's final placement in the tournament was 7/8th, netting themselves $25,000. Mushi showed once again he was one of the best SEA carry players with dominating Morphling play throughout the tournament. Unfortunately for Mushi (and Korok), Morphling received some sizable nerfs post TI2 and hasn't been very relevant in the months following it.

Following The International 2012, Orange and Mushi continued to show they were the best SEA team by winning the WCG Malaysia National Final over MUFC and WCG 2012 Asian Championship over MiTH. Finally, to top off their year, Orange participated in the G-1 Champions League Season 4. Placing well in this prestigious tournament would solidify their spot among the top 5 teams in the worlds. Orange was able to take 3rd place behind Team DK and LGD.cn. Not only did Orange take third place, but they beat The International 2012 champions, Invictus Gaming, to make it on the podium.

As with most sports, the two biggest players both in terms of personality and fame, tend to clash from time to time. Mushi and YamateH were no exception to this. Towards the end of 2012 and into early 2013 there were rumors circulating the SEA Dota 2 scene about Mushi leaving Orange after some conflicts with YamateH. Mushi took some time off from Dota 2 but eventually came back to the squad when YamateH announced he was leaving the squad for Zenith.[4] Along with YamateH, Ice and WinteR both left the squad to join Zenith and MUFC respectively. On January 25,Net, Ohaiyo, and kYxY were all brought in to fill out the roster at the same time as Orange signs an official partnership with Neolution while Mushi took a break from Dota 2. On February 4, Kecik Imba who had played for Orange's Heroes of Newerth squad was brought in to bump the team up to a 6 man roster. Orange was able to perform well enough with this new squad to once again earn a direct invitation from Valve for this year's edition of their major tournament, The International 2013.

Mushi along with Orange were placed in Group B of The International 2013 where they finished with a record of 8-6, qualifying them for the upper bracket. After losing 2-1 to last year's runners up Natus Vincere, they managed to advance very far in the lower bracket, eliminating Team Dignitas, Fnatic.EU, Team DK and TongFu with Mushi playing a large variety of heroes and making memorable performances on them such as his signature Shadow Fiend and Queen of Pain as well as Anti-Mage, Sven, and Ursa. Eventually, his team reached the loser's bracket finals against Natus Vincere and in a dramatical fashion were eliminated from the tournament 2-1, finishing 3rd place.

Mushi moved on from Orange Esports to join Team DK during the post-The International 2013 roster shuffling. When he joined Team DK the roster consisted of BurNIng, iceiceice, LaNm, MMY and Mushi himself. The team went on to place 2nd in MLG Championship Columbus and 1st in the Fengyun Dota 2 Tournament.

On the first day of 2014, Team DK won WPC ACE Dota 2 League 2013 in a spectacular 4-3 comeback against Invictus Gaming and claimed the ¥1,000,000 (~$163,400) prize. Team DK went on to win many premium-level tournaments such as G-League 2013 and Star Ladder Star Series Season 9, becoming an international fan-favorite team. Team DK later placed 2nd in WPC ACE Dota 2 League 2014 and 2nd in The Summit 1 against Evil Geniuses. After very recognizable results, Mushi and Team DK received an invite for The International 2014. Following this, the team won three tournaments in a row: ECL 2014, the CDEC New Star Challenge and the V Games Tournament, defeating Newbee in the grand finals of each.

During The International 2014, Team DK finished with a record of 10-5 in the group stages, and later won in the 3rd round of Phase Three of the tournament, placing the team into the upper bracket. After losing 2-0 to Evil Geniuses despite Mushi's excellent Death Prophet performance in Game 1, Team DK went on to win by a score of 2-1 against LGD Gaming after Mushi's excellent performances on Outworld Devourer and Shadow Fiend in games 2 and 3. In the next round, however, Team DK were knocked out of TI4 by Vici Gaming with a score of 0-2.
As many people expected, Team DK disbanded during the post-TI4 roster shuffle as BurNIng and LaNm retired. After this, there were many rumors that Mushi would return to the SEA Dota scene.

As Titan, who included 4 out of 5 members from The International 2013 Orange squad left the organization,[5] Mushi along with the 4 members, kYxY, Ohaiyo, XtiNcT, and Net formed Team Malaysia in October 2014 and began competing in many Southeast Asian tournaments. Team Malaysia accumulated a 17-game win streak and looked like they were the best team in Southeast Asia. However, Mushi left Team Malaysia in November due to internal issues with another member of the team.[6]

During late 2014, there were rumors that EHOME would be revived and that Mushi, Ohaiyo and 3 members of LV Gaming (END, Inflame, and ddc) would become part of a new EHOME roster. Mushi and Ohaiyo became stand-ins for LV Gaming during Dota 2 League Season 5, winning 1st place. After this, Mushi along with the other 4 members joined EHOME.

During the great Chinese reshuffle that followed the Dota 2 Asia Championships, EHOME acquired 2 teams; a Chinese team and a Malaysian team as Mushi and Ohaiyo joined the Malaysian team with kYxY, Kecik Imba, and JoHnNy. However, EHOME.my dropped the squad less than a month later and the team continued to play under the name Team Malaysia. During this time, Mushi switched roles to support and Kecik Imba played the mid role. After this, Team Malaysia went on another large winning streak, winning 16 games in a row and qualifying for many premium tournaments as well as earning them Southeast Asia's only direct invite to The International 2015. However, during i-league Season 3, Mushi switched back to his signature mid role and Kecik Imba switched to support. Team Malaysia were later picked up by Fnatic in June.[7]

During The International 2015, Mushi along with Fnatic began the group stages well after taking a game decisively off of Team Secret, who were arguably the tournament favorites. Despite this, however the team finished 7th out of 8 teams in their group, not winning against any team by a 2-0 score. In the main event, the team were placed up against Virtus.Pro, who recently played in a playoff between Team Empire to decide who would go to the Winner's and Loser's brackets. fng, Virtus.Pro's captain claims that he chose Fnatic because the other choice was Natus Vincere and they did not want to play against them because the two teams knew each other.[8] During the game against Virtus.Pro which was in a best-of-1 elimination format, Mushi changed back to support once again and ended up playing Naga Siren for the first time competitively despite playing over 80 heroes beforehand. Virtus.Pro managed to knock out Fnatic in this game as Mushi and his team were eliminated from TI5, finishing in 13th-16th place.

In the post-TI shuffle after TI5, Mushi and Ohaiyo were tasked by Fnatic to rebuild the entire team. They went on to pick up former midlaner DJ as a roaming support, Net as hard support, and finally the German world traveler Black^ as hard carry. With these pickups, Mushi moved back to playing midlane permanently. However, their international results barely improved, with last place finishes at ESL One New York, Nanyang, and, most importantly, The Frankfurt Major.

As a result, by December 2015, Black^ was removed from the team and replaced by Malaysian pubstar MidOne. After some time, this risky pickup proved incredibly fruitful, when Mushi and Fnatic shocked the scene at The Shanghai Major, where they eliminated the champions of The Frankfurt Major, OG. The team would end the tournament in 5-6th place, after being eliminated by their Southeast-Asian rivals MVP Phoenix.