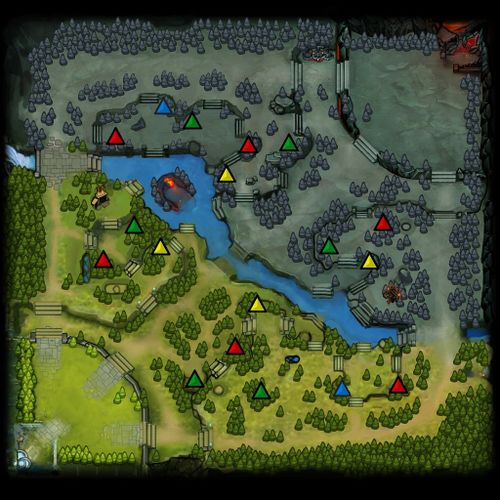 Neutral camp spawn locations on the map. Small camps are shown in blue, medium camps in green, large camps in red, and ancient camps in yellow.

For the creeps that appear in lane, see Lane Creeps.

Neutral Creeps (often simply called neutrals) are units found in the jungle. They spawn grouped together in camps. Neutral creeps can be used for farming gold and experience, and are commonly used in strategies such as stacking and pulling.

Neutral creeps spawn for the first time at 01:00, and then spawn every minute (02:00, 03:00, etc.) if the camp is empty. If there is a unit present within the spawn box, the camp is spawn blocked and new neutrals will not spawn. The spawn box is an invisible rectangle which checks for units within its boundaries. Holding ALT can reveal spawn boxes. If there are no units present within the box, new neutrals will spawn. A neutral camp will never spawn the same set of neutrals twice in a row.

Pulling is the act of leading neutrals away from the spawn box. This allows multiple groups to be stacked within a single camp.

When neutrals are stacked, they are a greater source of gold. Killing a neutral camp stack gives a bonus 35% gold bounty to the hero that stacked it. No bonus is given if the stack is cleared by an enemy or the hero that stacked it. This means it is optimal for a support to stack it, and a farming hero to clear it. An audio cue is played when a stack is successful. Stacked neutrals have a buff with the stacker's hero icon on it.

Neutral XP and Gold increases by 2% every 7.5 minutes.

Any hero that dies to Neutral creeps will have a respawn penalty, with a minimum respawn time of 26 (equal to level 6 respawn time). This only affects early game jungling.

Neutral Creeps do not do anything and stay in their camps unless provoked. They will aggro when units move within 240 range of them (except Roshan, who has an aggro range of 140). They will also aggro when units attack them or cast a spell targeting them within 1800 range. An Aggroed Neutral will attack the closest unit, not necessarily the one that attacked them. Priority is given to the attacker if they are one of the closest units. Creeps have a guard distance of 400 around their camp which determines how far they will chase. They will stop chasing once they have left the guard distance for 5 seconds, upon which they will return to camp, ignoring further provocation until 3 seconds after they return to camp. If they re-enter the guard distance before the 5 seconds are up, the timer is reset. They will also lose aggro if their target turns invisible or invulnerable.

If a Neutral Creep takes damage from an invisible source, it and all creeps within 500 range of it flee to a random spot 750 range away from their camp for 5 seconds.

A disarmed creep cannot be aggroed, nor will it cast spells. Neutral Creeps sleep at night. While asleep, their aggro range drops to 0, meaning that they will not attack anything walking by. They will still aggro if attacked or spells are cast at them.

On average, a small camp yields 60 gold and 107 experience.

On average, a medium camp yields 80 gold and 144 experience.

On average, an ancient camp yields 190 gold and 261.75 experience. Most ancients are have 70% Magic Resistance. In addition, there are some spells that are restricted from working on them.

Blocking neutral camps from spawning is a common strategy in high level matches. By doing so, it prevents the enemy from pulling, stacking, and farming. This is usually done by planting Sentry Wards within the spawn box, hidden by trees. The enemy must spend gold to deward the camp, making it a very effective strategy against most line ups.

Some units will not block spawns. These units are: