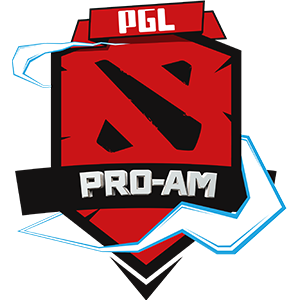 PGL Dota 2 Pro-AM is a new online tournament that will take place during September, October, and November with its focus on up and coming teams. The $50,000 USD prize pool will be distributed in two stages, firstly between amateur teams competing in the open qualifiers, then another batch of prize money split between the victors of the finals in November. The final stage will consist of 8 amateur teams from the open qualifiers and 8 invited Pro teams, allowing up and coming Dota 2 teams the opportunity to test their progress vs the Pros.[1]

The tournament is broken down into two stages. During the initial stage starting in September, eight amateur teams will qualify to the second stage in October, in which eight professional teams join them in a single elimination bracket. Amateur qualifications happen each weekend for four weeks, with top two of each qualifying to the finals.[2]

1 Big Red Machine disbanded and was replaced by Walrus Punch.