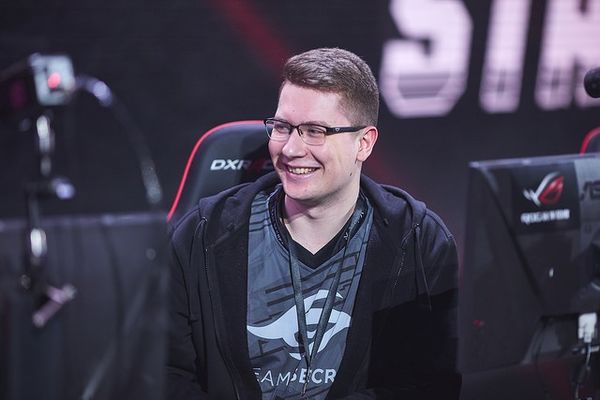 Clement "Puppey" Ivanov is an Estonian professional Dota 2 player who is currently the captain of Team Secret.

Everyone must forget the words CARRY/SUPPORT/GANKER, this is all rubbish. If you want to be useful, to win the game, you must play on all heroes, instead of crying like a baby when you have to play carry.
Clement "Puppey" Ivanov[1]

Puppey is one of the most prolific and storied captains in Dota history. He is not afraid to experiment, even in important matches. Despite the fact that he plays Jungler and Support most often, he is effective in any role.

Puppey's good knowledge of the English language has allowed him to play in many of the best European teams. Clement is an open and sociable man. Among other things he has a musical education, he can play the clarinet, violin, guitar and saxophone. He sang in the choir for 12 years and has since he was five years old. His dream is to start his own group.[1] He is one of the tallest pro players, standing at 6'5 (196 cm).

The first traces in the history of eSports and DotA[edit]

Clement started with pub games, just as everyone else did. His professional career started from the "Xero Skill" (XsK) team in the beginning of summer 2007. The roster consisted of relatively unknown, but skilled players. Puppey himself was still a "no name" in the eSports world. The first serious tournament for XsK was ClanBase - EuroCup XVI - WC3 DotA. Unfortunately they didn't make it out of the group losing to MYM and another unknown team. The first big victory for XsK happened on ESL Major Series where they placed 3rd, losing to MYM and "eMg". Puppey started to earn respect from professional players. [1] On 18th of April the official announcement says that the team XsK ceased to exist. Puppey explained that the misunderstandings started after their loss at MYM PriDe #8.[1]

After being teamless for a period of time, Puppey attended DreamHack Summer 2009 as a stand-in for Mouz, where they placed 5th. This is where the famous Puppey - KuroKy "bromance" began.[1] The 7th of June the ex-Virtus.pro team under the leadership of "joLiE" goes under the sponsorship of "KingSurf", getting a new tag - "Ks.int". 18 year old Puppey was invited to the team as an experienced player.

I am playing dota for more than 4 years. This game changed my life, and I hope that Kingsurf will do the same.
Clement "Puppey" Ivanov[1]

Their first tournament was ASUS Summer Open 2008 on the 24th of August. A loss to "Rush3D" in the finals and a 2nd-place finish wasn't too bad for a newly formed team. A week after the loss on ASUS some players left the team, or went inactive. This led to the merging of two teams - KS.int and WG.[1] The new team tested their strength right away, in the East Europe Dota Championship where they faced "Rush3D" in the finals. "KS.int" had their revenge, but unfortunately it wasn't an important tournament and the prize money was scarce. 2009 was approaching, after more roster changes the team still had no stability, or worthwhile results. But the team did not giving up and were showing some great games in clan-wars.[1]

Our mindset looked like this: "Let's make the best gank-team in the history!" This was the beginning of Ks.int, where Puppey took the place of a captain, and we started to execute our ideas and started to show the world what we are capable of.
"Puppey" & "Kuroky"[1]

The DotA-League Masters proved to be the long-awaited triumph of KS.int beating MYM.(highlights and the moment of victory.) At the end of July, scandal broke out inside the "KingSurf" organization which led to the departure of Ks.int from KingSurf's sponsorship. The team took the name of its new sponsors Razer.CGC.[1]

Razer.CGC attended a few more events, took another name in October 2009 - AEON.int and then everything started to crumble. The team stopped attending new events, KuroKy left to MYM, Puppey was constantly playing as a stand-in. Eventually Puppey and a few other skilled players created new team - Bens Friendly Buddies. After a victory over MYM in Farm4Fame tournament BFB drew the attention of "Blight" organization. In February 2010, after "Blight" got a new sponsor the team was renamed to Nirvana.int. The timezone difference between the Europeans and Americans hindered the team's performance. The changes did not take long. Nirvana created a new roster - Nirvana.ru, which Puppey joined after failing to get a US Visa. The creation of the second team was followed by serious roster problems. Nirvana tried to keep both teams, but eventually Nirvana.ru left from Nirvana's control and took a temporary name - TeamHome. Meanwhile, after the split of Nirvana.int, scandal broke out between Fear and Puppey over the slot on Farm4Fame. Puppey reacted harshly, unveiling some internal information, but still resigned his claim for the spot. After losing in the ESWC 2010 qualifiers to DTS, Puppey returned to Nirvana.int after Merlini's retirement. They placed 4th in the tournament and immediately after came more roster changes and an eventual departure from the Nirvana organization due to some unpaid salary and compensation for ESWC 2010. The new team took the name New World Order. Despite showing the discipline and dedication, New World Order was playing without a sponsor. The team couldn't participate in big LAN tournaments due to the lack of finance.[1]

23 January 2011 GosuGamers.net decides to create their own Dota team and signs NWO. The team takes new tag - "GG.net". PickLeague XIV and ROCCAT GosuCup#3 were the two first-place finishes for GG.net under the new tag.[1]

Na`Vi – is a team of "big hopes". This is the last year for Dota-scene (Dota 2 is waiting in the future), so many european teams stopped to fight for the first place in the world, but I want to fight. This is the time for change. Na`Vi – is the ideal opportunity to carry out my plans. I'm leaving my good friends from GG.net, especially KuroKy, with whom we played for so long. It's hard to set high goals and reach them, but I feel that we, Na`Vi will do it. Thank you to everyone who supported me, to team GG.net and to my fans. NEW WORLD ORDER FOREVER!
"Puppey"[1]

Na`Vi's roster would be: ArtStyle, Dendi, XBOCT, Puppey, and LighTofHeaveN. The reason for Puppey to leave GG.net was the lack of LAN event participation. In all this time GG.net didn't attend a single LAN event, whereas any given CIS team attended at least 3 for the same time. Puppey's first tournament under Na`Vi tag was the ICS#8 playoffs. In the winner bracket semi-final Na`vi met GG.net and stomped them in two quick games. Na`Vi took first place over MYM (2-0), taking their first win in the first online tournament with the new roster. On the 13th of August the team played in ASUS OPEN Summer 2011. It was their first LAN - and their first win. Next up would be The International. The first Dota 2 tournament - The International, with the unbelievable prizepool of $1.6 mil, was coming. Na`Vi got the betakeys required to play the game only 3 weeks before the tournament. (Puppey interview before The International)

My only problem - is the need to always speak in Russian.
"Puppey"[1]

Puppey made his first steps into the Dota 2 competitive scene with Natus Vincere among the likes of Dendi and Artstyle, as they competed in The International 2011. They went undefeated throughout the whole tournament, winning the unprecedented $1,000,000 USD grand prize. They also won ESWC 2011 and took home $12,000 USD.[2] In both of these tournaments, he demonstrated fantastic prediction with Chen's ability to send heroes back to base. Puppey became Natus Vincere's Captain after Artstyle's departure from the team in October 2011. After The International 2011 Puppey went on to captain Na'vi to a successful second place in both The International 2012 and The International 2013, and multiple other high place finishes. During the run-up to the The International 2014 it became clear that Na'vi wasn't the dominant force it once was. They finished TI2014 in seventh place, their worst result in a TI.

He was then released from Na`Vi on August 20, 2014.[3] One week later, on August 27th, it was revealed that Puppey, along with Kuroky, Fly, BigDaddy, and s4, had formed Team Secret.

Hailed by many as a super team, Puppey joined Team Secret as their captain. After a rough start and some roster switches for the new super team they got their first LAN tournament win at the The Summit 3. Team Secret looked really dominant the months before The International 2015, but only managed to finish seventh.

After The International 2015 Team Secret split up, with only Puppey remaining. Puppey then formed a new team around himself. The new Secret was able to win the MLG World Finals against TI5 champions, Evil Geniuses as well as taking the Nanyang Dota Championship from Vici Gaming and taking runner-up at the Frankfurt Major. The team however, faltered at the end of the year with an early departure from the World Cyber Arena 2015. At early 2016, the team's mediocre results marched on with a 5th-6th finish at Starladder and a 7th-8th finish at the MarsTV Dota League. The team, however, made a large resurgence by winning the Shanghai Major early into the year. After a last place finish at the Dota Pit, in a controversial decision, the team opted to kick both w33 and MiSeRy to welcome UNiVeRse and Arteezy.

The team later disbanded a second time with all members and coaches, save for Puppey and Pieliedie, leaving. Although there was a major setback, the team was able to rebound when it received Midone, Forev and MP from the post-International shuffle. The reformed team was able to take top 4 the MarsTV Dota League as well as 1st at the Faceit Invitational. In the end, though, the team failed to qualify for the Boston Major, and Forev later departed and was replaced by Khezu. Team Secret would later go on to take first at ROG MASTERS.