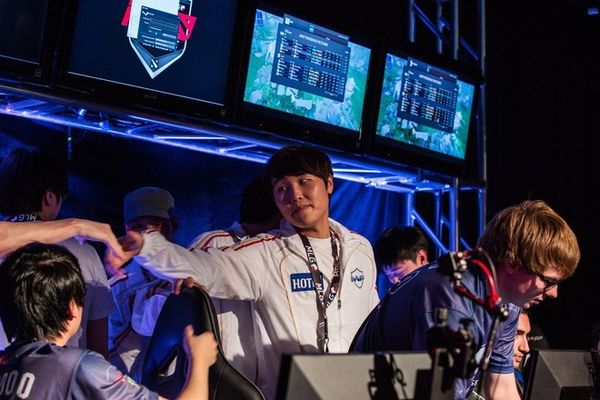 Kim "QO" Sun Yeob is a South Korean/Australian Dota 2 player who last was an analyst for T1.

QO was first introduced to DotA when a man from a church showed him the game every Sunday. While initially bored and disappointed at the game because he was dying a lot, he eventually decided to learn and persevere with the game eventually beating the man from the church.[1] While learning the game, QO played DotA as leisure during his years in Australia under the name RoastedKimchi.[2] He continued to play the game when its sequel Dota 2 was released.

An older brother taught me how to play Dota. He picked Lion in the first game. I don’t remember what I picked, but I remember he just killed me at level 6. I was really mad at him. You know how Lion has a Finger of Death which has like really high damage? He killed me once and he bought Dagon. In DotA 1, Dagon and Finger of Death had the same animation. I was like: “Dude, bro, you’re cheating!” I was so mad.
(QO, about when he first started playing DotA)

QO's origins of his name was by chance when he made the decision to change his nickname due to most websites and gaming platforms allowing only 4-12 letters when his previous name, "RoastedKimchi" contained 13 letters. By randomly choosing the letters QO, he also realized that it in capitals that it looked like a face and furthermore from word of mouth, typing QO on a Korean keyboard meant don't back.[3] Coincidentally, he believes that he does not "back" and likes to play aggressive while in Dota 2, picking a username does not need to be between 4-12 letters, hence choosing the name QO. While playing other games such as League of Legends, he eventually chose Dota 2 because of its depth and was interested in the Blink ability.[4]

While studying science in Australia, QO's first professional Dota 2 stint came in 2013 with AkmA which was a group of Australian players in a stack. For his winter holidays, he traveled to South Korea and met his future teammate Sagun online. After numerous talks with Sagan, he was introduced to March. The emerging Nexon Dota 2 events in South Korea saw this as an opportunity to play with March and QO decided to take a gap year on his studies with the consent of his parents.[4] He joined FXOpen e-Sports alongside March, Febby and Sagun as a mid laner. Despite being knocked out of the AMD Premier League Season 2 in the round of 16, QO displayed his worth to the team by playing a great series in the Nexon Starter League Season 1 with a surprise mid pick Meepo in the grand finals to secure a 3-0 grand final win against EoT Hammer, winning the tournament and complimentary tickets to watch The International 2013.[4] QO then left FXO and made his own team called 5 in QO. In 2014, QO joined MVP Phoenix and saw them qualify for Starladder StarSeries IX - their first lan event outside South Korea. Over the course of 2014-15 QO participated in more events and showed displays of growth as player with placing 4th place in I-League Season 2 and Starladder StarSeries 11. The team carried this play into the qualifiers for The International 2015, making it through the qualifiers and wildcard, and ending up placing 7-8th. The team exhibited their determination and resilience, under the looming speculation of March retiring due to military service. QO became known for his Templar Assassin throughout the tournament against Team Empire in the first match of the elimination when on the 29th minute, he survived a 1v3, and despite initially fleeing, decided to Meld and killed two with style - QO finished the game with the score of 19-5-5.[5]

In 2016 saw a transition and further growth for QO and MVP with first place wins in Dota Pit League Season 4 and WePlay Dota2 League Season 3. He has placed 4th and 5-6th place in Shanghai and Manila majors respectively. QO believed that the rise in MVP Phoenix was due to continually playing ranked solo matches and further practice. In an interview, QO mentioned his "solid-play" style as a further reason behind its recent success in 2016:"Our team is highly based on individual skill. Our players read skills well, they foresee the next movements. Those kinds of things help the drafting. Whatever you draft, a skilled player can play anything."[6] The team's recent achievements saw them receive a direct invitation to The International 2016. QO was featured in a player profile and finished 5-6th place in the tournament left MVP Phoenix.[7] He competed at the MPGL/Southeast Asian Championship with a stand-in team, finishing runners-up. He later returned to MVP Phoenix with the stand-in team.[8]

On the 18th January 2018, QO announced that he would be taking a break from Dota 2.[9] During his extended break he returned to Australia to study, and with documentation issues, he later formed Team Oracle in April 2019 and was announced as the carry player for the team.[10]