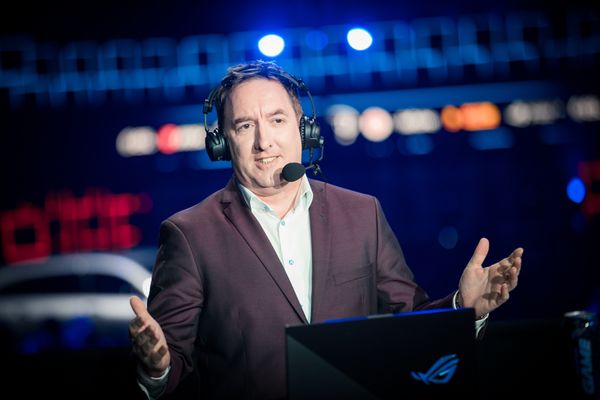 Paul "Redeye" Chaloner is a former British host and commentator, well known as one of the world's first professional esports and video game broadcast commentators. During his career, he commentated a myriad of games, including Quake 3, Quake 4, Counter-Strike: Source, Counter-Strike: Global Offensive, StarCraft 2, Team Fortress 2 and Dota 2, and has broadcast in dozens of countries like China, United States, Singapore, Australia and Denmark.

His career in esports began in 2002 when a friend approached him and asked if he'd like to Shoutcast a Quake game. Redeye agreed, despite not really knowing what he was getting into. However, he and his audience loved it, and Redeye casted multiple more small tournaments over the next 18 months. In 2004, he was approached by djWHEAT to work for Radio iTG. With some reluctance, Redeye agreed and over the next two years shoutcasted many big tournaments for them, including WCG 2005. However, in late 2006, Redeye retired from shoutcasting as he'd run out of money, and promised to go into a more 'normal' job.

But this was not to be the case, because in early 2007, he and djWHEAT got an offer from the company CGS to shoutcast for them. Redeye moved to the US, and from 2007 throughout 2008, completed hundreds of TV shows all over the world for companies such as Sky and ESPN. When the recession hit, Redeye lost his job and all of his tournament contracts apart from WCG. Redeye had another break from esports, before joining Heaven Media to 'help run their expanding esports empire of websites'. In this time Redeye learned a lot about social media just as it was kicking off.

Redeye kept casting at WCG right up until 2011, when he realized just how huge the western scene was getting as well, with companies like MLG and ESL bringing in amazing numbers. During this time he was working for a company called Fresh Egg, as their Head of Social Media, using the skills he learnt from Heaven Media. He resigned from this position early in 2013 and began working for ESL as a host/commentator.

In June 2020, James Banks publicly accused Redeye of repeatedly abusing his position of power and his role as Managing Director Code Red Esports, as well as physically assaulting a Gfinity employee.[3] Redeye publicly denounced most of the allegations, however on June 29th, he announced that he would be stepping down from Code Red Esports and exiting the esports industry, citing his declining mental health from public outcry compounding with the stress from the COVID-19 Lockdown.[4]