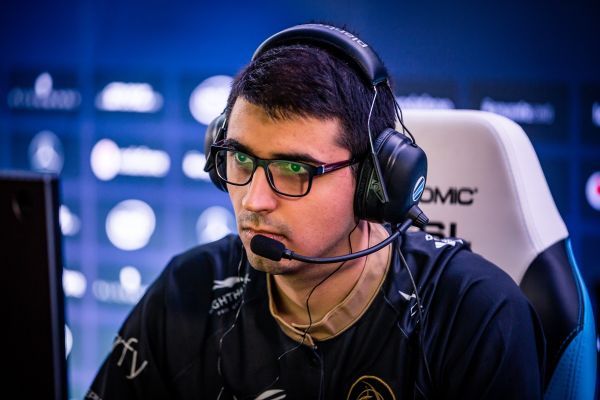 Saksa played lots of video games in general growing up, tracing back to playing Starcraft at an age of 3. He started playing DotA when he was about 10 years old, playing on the Garena servers.[1] Saksa's meaning behind his name was from his early years of playing DotA when he purchased a gold account membership for a month from Garena after realising his account got hacked. After finding the hacker, he was given another account with the name Saksa and has used that nickname to this day.

While studying at university, he decided to leave and focus on Dota 2 full-time after seeing his improvement in the game. Saksa's first team was with Global Challengers, an all-Macedonian team which he stayed a part of for over a year. He later joined Team Moriarty for a short period afterwards, winning GIGABYTE Challenge Cup #16. Around mid-2015, he began gaining notoriety for climbing the matchmaking rating leaderboards and eventually becoming one of the first players to hit 8000 MMR. Shortly after achieving this, he was invited to be a part of 4 Clover & Lepricon's new lineup as their support player. In January 2016, it was revealed that he joined Mamas Boys as a support with Pajkatt as captain. His growth of a player continued when despite not winning a game in the groupstage of Captains Draft 3.0, managed to place 4th place in the tournament. Later on, he joined Digital Chaos a few days before Valve's roster lock. After months of being with the team, he attended his first Valve event, The Manila Major finishing 9-12th place.

During mid 2016, he further continued to growth as a player and team with 5-6th placements in Summit 5 and Starladder i-league Starseries Season 2. He qualified for the The International 2016 and despite being coined underdogs in the tournament, Saksa's run in the main event of his first international saw him finish runners-up to Wings Gaming.

Following 2016, Saksa did not find a stable team until 2018, with Ninjas in Pyjamas, with whom he won two DPC Minors. In 2020, he replaced JerAx as the position 4 player for OG, achieving top 8 at The International 2021; however, he was kicked from the team shortly afterwards.

Saksa replaced Fata at Tundra Esports in early 2022 in controversial circumstances. Six years on from his TI final defeat, Saksa would finally lift the aegis at The International 2022 after a dominant performance throughout the tournament.