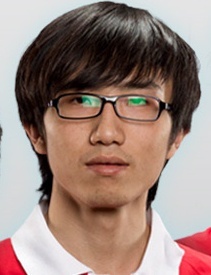 A former TI champion, he had retired from active play in 2015 to coach and commentate. He returned to active play in March 2019, when he rejoined Newbee with whom he had won The International 2014.[1] After playing for 1 month he chose to retire, and joined Old Boys on May 1st.[2]

SanSheng played in the 4 position for TongFu, placing 4th in The International 2013. Following the announcement of Zhou's retirement in early 2014, TongFu disbanded and SanSheng was left teamless. He was later picked up by Newbee on the 25th April,[3] with whom he went on to play in the next two Internationals, winning it in 2014.[4]

After their TI victory, the TI champions would lay low and any meaningful achievements were few and far between and at the following TI, the team exited in last place. As a result, SanSheng was benched and later retired completely from active play. He went on coach the new Newbee squad for a time after which he started to attend LANs as commentator and analyst. For The International 2018, he rejoined Newbee to coach the team but was unable to bring any success to the team.

After TI8, SanSheng joined the surprise TI attendee Team Serenity as a coach. In March 2019, he returned to active play. He rejoined Newbee, this time as a player.