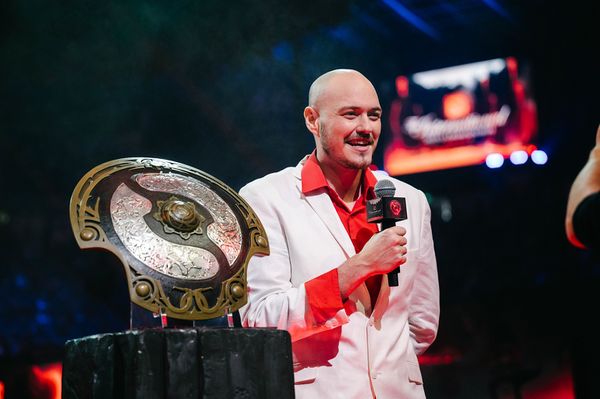 Jake "SirActionSlacks" Kanner is a Dota 2 personality, host, and interviewer. He is currently the manager of Arkosh Gaming.

SirActionSlacks has a colored history of involvement in the Dota 2 scene in many different roles and with numerous organizations. He is best known for his outgoing and friendly personality, as well as his near-boundless energy when working at events.

In 2013, a young YouTuber and casual TF2 player named Jake Kanner learned of a game called Dota 2, and his life was never the same. In November of that same year, he released his first Dota 2 video I made stupid voices when I play Dota 2: Gyro the Ward Support and it all went downhill from there. Slacks was called many things in this period of his life, but he stayed true to his style and pumped out video after video of himself doing funny voices while solo queueing in Dota 2 pub games. His notoriety caught up with him, brought him to the front page of the /r/dota2 subreddit, and cemented his foothold as he stepped through the door into the Dota 2 community for good.

Slacks has pumped out 141 videos on his YouTube since discovering Dota 2, covering events, interviews, jokes, failed pilots, and more. Not all of them are Dota 2 related, but they are all from the mind of a pure madman and document his career in a way that words cannot. Over the course of time, Slacks has uploaded multiple series outside of Stupid Voices in Dota 2, such as his Down Low series, where he showcases the teams and players entering a Valve-sponsored event and, more recently, Hotpants, where he and Hotbid host a podcast with other personalities, casters and players. He recently created Loregasm, a series about Dota 2 lore and theories.

After his moderate YouTube success began, Slacks made the foray into the Twitch community in June 2014 and quickly developed a large, loyal fanbase for his unique style of streaming. Thanks in part to the partnership program and through donations from his fans, Slacks was able to afford to make the leap of quitting his normal day job and plunging into Dota 2 full-time. Full-time streaming became SirActionSlacks' career for a good twelve months, as it provided him enough income to do what he loved. However, with the advent of Moonduck Studios, and with his recent success as an interviewer, caster, and host at professional Dota 2 LANs, SirActionSlacks is no longer afforded the time to maintain his status as a full-time streamer.

Alongside SUNSFan, SirActionSlacks is the co-host of the well-received YouTube series Fails of the Week. SirActionSlacks picked up the gig after Reaves left the series on episode #118. To date, Slacks has participated in 82 episodes in the series, and in addition to being the co-host, he also sifts through 100s of submitted clips to find the juiciest fails for the series.

In August 2015, in the immediate aftermath of The International 5, Moonduck Studios was formed as a new studio and talent agency. SirActionSlacks joined the team as a founding member and the team's premier talent for "Interviewing and Coverage". This new position provided him the visibility and leverage necessary to begin to cover high-profile Dota 2 LANs and tournaments. Through Moonduck, Slacks has worked on various Moonduck-associated tournaments, including but not limited to: Canada Cup, Captains Draft 3.0, and the Elimination Mode tournament. Slacks also provides color commentary on the Moonduck podcast "What the Duck!?" where Moonduck personalities discuss pertinent issues in the Dota 2 community through a comedic lens.

Through the "Ticket to TI4" (later reprised as the 'Golden Ticket to TI5') contest run by SoylentPersons, Slacks was awarded a full-ride trip to TI4 as an independent content creator for his video I am the Bloodseeker: My attempt at the international ticket. While Slacks did not attend TI4 in an official capacity, he and his camera crew recorded many interviews of fans and talent. This event served as a proving ground for Slacks, and his style of aggressive, independent, go-getter interviewing and vlogging had amazing results, showing that success and notoriety in esports entertainment are attainable by anyone with the drive and passion necessary to go out and claim them.

Fresh off his work at TI4, ESL hired Slacks to provide interview content at their first North American Dota 2 event. Working alongside many of the joinDota staff, SirActionSlacks and Soe provided comedic fan interviews and segments, many of which did not see the light of day due to scheduling issues, pauses, hardware failures, and other incidents.

SirActionSlacks attended The Summit 3 as a special guest and miscellaneous staff member. His duties largely consisted of driving players to and from the BTS house, with the understanding that the event would provide Slacks the free rein and opportunity to create his own style of content and to further his brand.

During The International 5, SirActionSlacks provided interviews, content, and coverage for Viagame, owner and partner of ESL. His participation in The International in 2015 was similar in many respects to his participation in 2014, however in a more official press capacity. While Slacks was not on the official Valve talent list for TI5, the addition of a press pass and professional camera crew to Slacks' arsenal allowed him to obtain high quality interviews from high-profile individuals during the event.

In 2015, ESL scaled back their talent invite list, allocating only Soe for interviews and reporting. Not one to miss a large North American Dota 2 LAN, SirActionSlacks teamed up with eSports.US to provide additional interviews and content at the event.

The idea of a 'Twitch Chat Reporter' started with James 2GD Harding at The International 5, and Twitch decided to have Slacks reprise the role for The Frankfurt Major. Slacks, alongside Sheever, put out a constant stream of small filler videos for the Twitch Chat Reporter Instagram account during the course of the event. These largely consisted of small jokes and jabs at other personalities and players, but also covered the inside scoop of the major in a way that an official camera crew could not.

Slacks reprised his role at The Summit, providing miscellaneous content for BTS, this time under the official category of "Tomfoolery". While many comedic videos were produced, Slacks also produced serious player interviews with members of all of the invited teams.

Back on the ESL talent lists, Slacks attended Manila as the event's official "Meme Correspondent" producing quality interviews and comedic filler content. It may be of note that the people of the Philippines in particular developed an unusual love of SirActionSlacks, which may have contributed to his future participation in events at Manila.

The Manila Major, hosted by PGL, was the first Valve-sponsored event to officially invite SirActionSlacks in an entirely serious and professional capacity. With the title of 'Interviewer', Slacks proceeded to put out some of the hardest-hitting and most well-received player interviews of his career.

Invited to an International for the first time, SirActionSlacks was responsible for interviewing fans, event-goers, backstage staff and other personalities. He also worked with other personalities to create small segments to advertise various aspects of the event and co-hosted the short film contest and the cosplay contest alongside Kaci Aitchison. He later faced Kaci in the All-Stars match, where he unveiled the arrival of Underlord.

Slacks was once again invited to the event and was given the role of interviewing players before and matches. Aside from matches, he also held multiple comedic segments in-between matches.