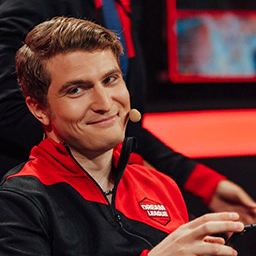 Rikard 'skrff' Holm Melin is a Dota 2 observer. Along with Weppas, skrff is also another person that is "behind the scenes" during tournaments for being the camera man when the casters commentate.

Rikard was an avid gamer when he was a young, rooting back to his childhood years when he had a Nintendo 8-bit. He started to play PC games when he was around 10 years old and his first roots of competitive gaming started when he was playing Counter-Strike 1.1-1.6 with World of Warcraft later on the list then ended up playing Bloodline Champions under Team Dignitas.[1] Weppas considers skrff as the best Vanguard (a (hero/bloodline in Bloodline Champions) in the game.[2] While working in a steel plant during his tenure with BLC, he later joined The GD Studio. Appearing in the popular GD weekly shows and a number of casts, he later joined Weppas in becoming a dedicated observer for Dota 2. Showing persistence and dedication through a significant amount of observing Dota 2 matches, skrff and Weppas are considered the best observers in the Dota 2 scene today. Skrff is still a member of The GD Studio today as a Producer/Talent and also streams on Twitch.