If the camp's spawn box is empty at the minute mark (XX:00) new neutral creeps will spawn. Once additional creeps have been allowed to spawn, the camp is stacked. The challenge with stacking is to pull the camp at the correct time, because neutral units in the spawn box will block new neutral creeps from spawning. 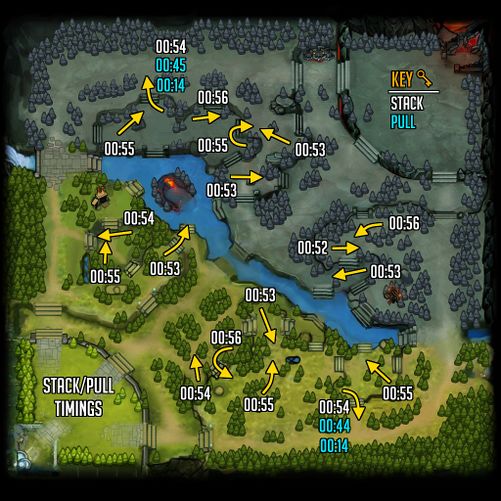 To stack a jungle camp simply draw the aggression of the creeps around XX:53 to XX:55 and let them follow you in a direction that will put you and the creeps outside of the spawn box at the minute mark. The exact timing varies slightly between camps, see image for more information.

A "spawn box" is the area associated with a jungle camp which no hero, creep units, or wards may be in at the new minute mark (XX:00) for new neutrals to spawn in the camp. The areas vary in size and knowing which ways to pull the creeps is a vital part of playing the jungle, 4th, or 5th role.

This technique is a staple skill for Support heroes.

At the end of the laning phase, when a carry will start moving into the jungle and farm Ancient Creeps, stacking the camps whenever possible is a vital part of gameplay. This gives the team carry more farm from the stacked camps thus putting them closer to the gold and experience they need to be effective.

By placing a ward inside the spawn zone of the creep camp closest to the lane (the one used for pulling) you prevent neutral creeps from spawning there.

Because neutral creeps distribute their experience to both teams, interfering with enemy pulls may be beneficial because you gain part of the experience they would have gotten.