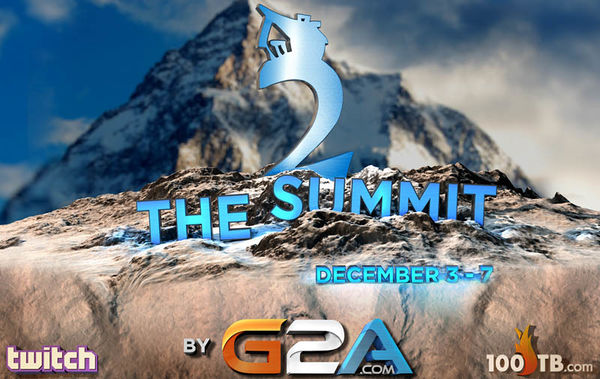 The Summit 2 was a tournament hosted by Beyond the Summit (BTS) that featured one invited team and four teams that qualified through regional online qualifiers. The final team will be voted in by compendium owners through "Team Redemption."

Beyond the Summit aimed to create a "behind the scenes" oriented tournament, inspired by TakeTV's Homestory Cup in StarCraft 2, where the fans can see sides of their favorite players that they don't normally get to see. To achieve this the tournament was be held at the BTS House in Los Angeles, where the crew currently live and work.

Invites
One invited team, Evil Geniuses, winner of the first edition.
Four teams from the qualifiers, one from America, one from Europe, one from China, and one from Southeast Asia.
One team voted in by compendium owners.
Group Stage
Best of 1 round robin group.
Top two teams advance to semifinals.
Remaining four teams seeded in quarterfinals.
Playoffs
Best of 5 single elimination bracket.
Grand Finals are best of 5 with no winner's bracket advantage.