Toby "TobiWan" Dawson is a former Dota 2 commentator, most notably known previously for JoinDota.com as a co-founder and talent. A caster who had been in the esports scene for more than a decade, Tobi Wan was one of the most prominent Dota 2 casters and had been to every International since its inception in 2011. While initially casting Call of Duty: United Offensive games, he later ventured into Starcraft II and Heroes of Newerth and Dota 2. He was considered to be ‘the voice of Dota 2’ and the most emblematic caster in the scene. [1][2][3]

He has won numerous commentator awards such as the GosuGamer's commentator of the year three times in 2013, 2014 and 2015.

Toby 'TobiWan' Dawson was born in Nambour, but grew up in Maleny, a small town off the Sunshine Coast, in the state of Queensland. He has once mentioned that it is one of the most beautiful places he has seen, and is first on his list of places to retire. [4]

Toby didn't grow up as a gamer, which is unlike most gaming personalities. He developed an interest into sports most specifically: Soccer, Tennis, and Cricket during school. However, his real passion throughout his formative years was musical theater. Gaming was a slow process for TobiWan during his developing years, as it was a reward after completing his chores, tasked by his mum. While his mum showed little interest into gaming, he was only able to play a maximum of one hour of games every single day. [5] Despite the limitations Tobi experienced, he continued to pursue with video games into university with his mates, playing Call of Duty and Battlefield with his cousin. His continuation with video games in the FPS side, led him to playing Battlefield clans to managing them, and eventually even took over the running of small-scale Call of Duty tournaments.

One June 25, 2020 Toby posted on twitter and reddit saying "I am aware that I have committed some horrible actions in the past and I wish to atone for them.", and asking anybody he harassed to reach out to him via direct message.[6] Following this, Twitter users botjira and Meruna_ posted allegations that Toby had made unwanted and forceful sexual advances to them.[7][8] After those allegations were made public, Toby posted his own reply saying he did not intend to pressure anyone into sex but understood that he had acted inappropriately.[9] Shortly afterwards LD and Synderen both announced that they would no longer be working with him in the future, and Valve updated the TI 10 Battle Pass to remove his voice lines.[10][11][12] Toby later released a statement in which he maintained his innocence, but announced that he would be permanently leaving esports.[13] 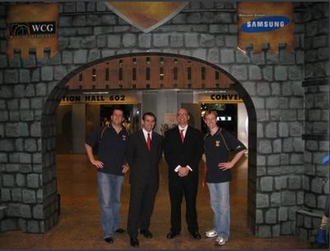 His first stint with casting began when he was playing a the Capture the Flag mode on Call of Duty United Offensive, but the decline of players (who later shifted to the newly released, Call of Duty 2) saw him attempt to inject life into the current game. A man named Sam, alternatively by his alias "Dement" down under in Australia suggested that GameStar (an Australian shoutcasting and media organisation) as an recommendation to be able to help revive the fallen game. [14] When TobiWan made a request to obtain one of GameStar's commentators, his application was rejected and in reply, he decided to create his own group named: United Offensive Talkers. His live stream on his website, on the now defunct "Touch Tech Gaming", recorded his audio using Audacity and streamed on wimAMP. On his maiden night, the website crashed due to an overwhelming number of listeners tuning in. Despite the production was not professional, the community exhibited immense support which caught the attention of GameStar's marketing manager and decided to hire the production crew Tobi and himself as volunteer commentators. [15]

GameStah gave Tobi the Call of Duty section, he was later invited to World Cyber Games (WCG) in Singapore in 2005. This event marked Tobi's first major tournament. TobiWan's ambition of casting Call of Duty in front of a large crowd at the Suntec Singapore International Convention and Exhibition Centre was cut short after the FPS genres were covered, but in unexpected circumstances the mod of Warcraft III: Dota All-stars required casters, despite the game was classified as an official game under WCG - due to no developer backing behind it, as it was later revealed the Dota event was made for the fans. [5] TobiWan's Dota casting career went underway after he was given the tick to be a co-caster, despite only having played three DotA matches, but the other GameStah attendees had not played a single game, hence TobiWan was considered the most experienced out of the rest. [5]

"'So anyone out of our entire group,' and that was like 50 volunteer casters, 'put your hand up if you've got experience in Dota,'" "I put my hand up, saying, 'I've played three pub games of Dota.' That was more experience than anyone in the group, and I got sent."
TobiWan reminiscing his first match of casting Dota on November 2005 at WCG [2]

TobiWan did manage to obtain some casting time with Call of Duty where he helped cast a match with a co-caster named Neville.

2006-2010: Transition to Warcraft III Dota and other ventures[edit] 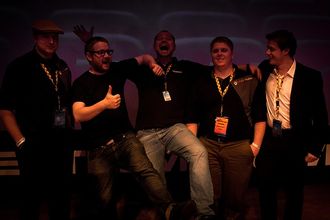 Following the event, TobiWan still attended LANs moderately but working as an volunteer commentator ment he had to be realistic in his financials. While he was continuing to cast games, and with a shifting interest into DotA, he began working full-time in retail, whilst still attending university.

TobiWan also branched out to other games such as Heroes of Newerth, Starcraft II and his FPS games to further improve his casting ability. He also still continued to be with Gamestah casting a variety of FPS games such as Call of Duty, Counter-Strike Source. In April 2010, TobiWan created his own personal website, wanstop.com. [16] His website contained personal blogs of events such as the notable MYM Farm for Fame, DreamHack events and released a daily "VOD of the day" article.

He also attended DreamHack Summer 2010. alongside with the honcast crew - the official Heroes of Newerth casting crew. It was also later revealed that his tour at DreamHack marked the end of his three-year tenure with Gamestah, where he joined E-sports Media team. [17] [18] 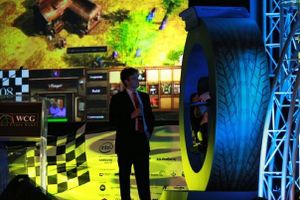 In late 2010, TobiWan was asked by Moritz `Moose´ Zimmermann, the project manager of joinDOTA at the time, to join with him on a Dota 2 project. The project involved TobiWan moving from Australia to one of the offices in Berlin where it was the project was unveiled as joinDOTA, a concept made by Moose where its inital idea was to showcase TobiWan's livestream with a countdown. With financial backing provided by Freaks 4U Gaming, TobiWan was satisfied with Moose's plan and Tobi travelled to Berlin in 2011. [19]

"'The leap TobiWan took still blows my mind today, but it all worked out perfectly. I have been very proud of him and thankful for taking this great risk and traveling so far to become the key component of what makes this website what it is today. Without him and Freaks 4U Gaming, none of this would have been possible, not even in the slightest."
Moritz `Moose´ Zimmermann on TobiWan's decision to move abroad creating joinDOTA in late 2010 [19]

Before he travelled to Berlin, TobiWan joined Cybergamer Australia in February 2011 after deciding to shutdown his website, wanstop.com. [20] In June 2011, the beta of the joinDOTA website was released and later made its full debut. With a growing presence of viewers, the website's ascent continued where joinDOTA's functions expanded to adding forums, adding news articles and a readable match-ticker. 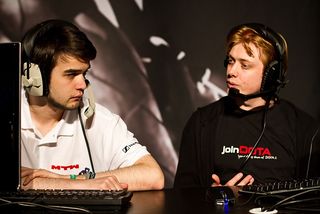 TobiWan was invited to cast Valve's inaugural "The International", a prestigious tournament for the incoming Dota sequel, Dota 2 at Gamescom 2011 in Germany where it was announced the winning team would receive $1 million dollars. [21]

Following the widespread success of The International, joinDOTA began to establish their tournaments such as he Defense and The BenQ clash. [22] These were one of the first ever Dota 2 events made, while Dota 2 was still in beta. Into 2012 with joinDOTA in full swing, he continued to cast in numerous tournaments. In May 2012, TobiWan was forced to apologise after making a racist comment in-game. [23]

He was again chosen in The International 2012, but during the event an incident involving Valve and his co-caster Slesh saw the mTw player syndereN who was eliminated early in the tournament co-casted the grand finals of Natus Vincere and Invictus Gaming, instead of the TobiWan-Slesh duo. [24][25] The incident saw a widespread disapproval towards TobiWan's conduct, demanding control over which games he would commentate on. [26][3]

In 2013, joinDOTA launched its own league called joinDOTA League (jDL) competition in a division setting allowing promotion an relegation at the end of the season, where TobiWan casted numerous games. [27] TobiWan also joined the casting crew on ESL's stint involving Dota 2 with the EMS ONE One Series splitting into three seasons: Fall, Summer and Spring. TobiWan also participated in the The International 2013 and said the grand final matchup between Natus Vincere and Alliance was the most exciting match he has seen. [28] Following into 2014, ESL's involvement into Dota 2 reached new heights as TobiWan was involved in ESL's next project where he was narrating and featured in the trailer of ESL One Frankfurt 2014 showing him inside Commerzbank-Arena, a football ground in Germany.[29] In March he was featured in Valve's first documentary called 'Free to Play' involving the maiden tournament: The International 2011. [30] He later joined his fourth International in July. 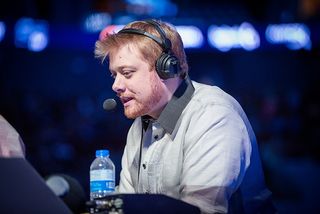 Early 2015 saw TobiWan cast matches for Valve's other game, Counter-Strike: Global Offensive. While TobiWan was working with PGL on a Dota 2 project, complicated circumstances saw the project be postponed and with a Counter-Strike Champion Series imminent, he decided to cast the matches and said he it was just a bit of fun. [31][32] He later returned to Dota 2 and casted in The International 2015 and became later famous on his commentary when ppd and universe made a duo Ice Blast and Echo Slam combo, exclaiming: "It's a disaster!." [33]

He continued to participate in numerous premier tournaments in 2016 such as: The Shanghai Major 2016, EPICENTER, The International 2016 and Boston Major 2016. In the 2017 calendar year, he participated numerous events as a caster and initiated his own content through his YouTube channel and discord page.

On the 2nd January 2018, TobiWan formally announced his departure from Freaks 4U Gaming, the company that behind JoinDota and cited upcoming projects as an independent talent. [34]

As of July 2020, following sexual harassment allegations, he is no longer active in the esports community.