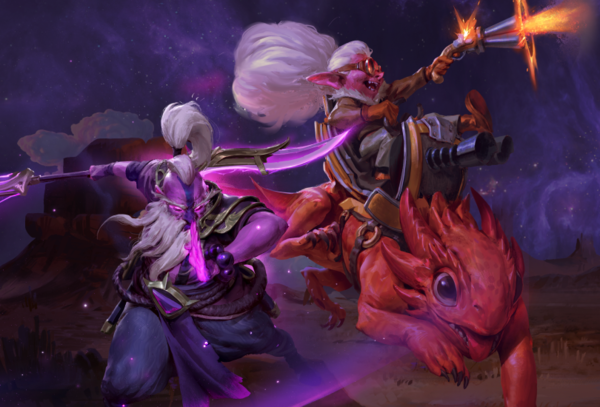 Note: Both Ancient camps are now on the opposite side of the map from Roshan.

There are two of these on the map, located where the Side Shops were previously. Right clicking to channel it takes 6 seconds and then you gain control over the outpost. Converts faster with more allies channeling. Having control over an outpost grants you bonus XP upon initially capturing it, and at 5-minute intervals on the game clock. It also provides your team unobstructed vision in that area and allows you to TP to it. Outposts are inactive for the first 10 minutes of the game and cannot be captured then.

Neutrals now drop unique items that cannot be sold, but can be shared with allies. There are five tiers of items that drop over the course of the game. Within each tier, the odds get cut by half for each subsequent drop. Items of a specific type will only drop once for each team. Drops only begin after 5 minutes.

There are 62 unique neutral items in total.

Backpack slots increased from 3 to 4.

These are the odds for the first drop of each tier - Each subsequent drop between a tier is cut by half. So if the first drop is 10%, the next within that tier will be 5%, then 2.5%, etc.

Drop chances use Pseudo Random on a per tier and per team basis. Only rolls for a drop whenever there is a real hero near the dying neutral.