Visage, the Bound Form of Necro'lic[edit]

Perched atop the entrance to the Narrow Maze sit the looming shapes of sneering gargoyles, the paths into the hereafter forever in their gaze. Beasts and birds, men and monsters, all creatures that die and choose to travel beyond must someday pass beneath their sight. For an untethered spirit, the decision to journey through the veil of death is irrevocable. When chance comes, and by craft or cunning some restless soul escapes their hells and heavens, it is the dreaded gargoyle Visage, the bound form of the eternal spirit Necro'lic, who is dispatched to reclaim them. Ruthless and efficient, unhindered by the principles of death and fatigue, Visage stalks its prey without mercy or end, willingly destroying all which may give shelter to the fugitive essence. That which flaunts the laws of the afterlife may never rest, for while it is true that the dead may be revived, it is only a matter of time before Visage finds and returns them to their proper place.

As his deadly familiars scout the field, Visage cloaks himself in armor and seeks the next battle. Once near a skirmish, he gathers soul energy from damage inflicted upon nearby fighters before releasing it in a devastating attack.

QG
Targeting
Unit Target
Affects
Enemy Units
Visage drains the movement and attack speed of the targeted unit, gaining it for itself.
16/14/12/10
13/11/9/7
10
90
The warmth of the sun is never felt in the dark cold of the Narrow Maze.
Notes

WC
Targeting
Unit Target
Affects
Enemy Units
Damage Type
Magical
Visage damages the targeted unit based on the number of soul charges. Visage gains a soul charge when damage taken by all heroes around him reaches the damage threshold.
4
125
The collected souls of the dead reach out to bring another into their fold.
Notes

EV
Targeting
Passive
No Target
Affects
Self
Visage generates a layered barrier that protects him from damage. If he receives damage from a player exceeding the threshold, one layer is removed, and takes time to recover.
0
60
0
125
Visage's tough scales share equal properties of ghost and stone, making it nearly impervious to blade and magical assault.
Notes

RT
Targeting
No Target
Conjures two blind Familiars to fight for Visage. Familiars possess the Stone Form ability, that allows them to turn into stone, stunning enemies upon landing. While in Stone Form, Familiars are invulnerable, and rapidly regenerate their health. Familiars grant a high bounty when killed.
130/120/110
150
Guardians of the Narrow Maze, Necro'lic's Familiars stand watch over his domain.
Notes

Silent as the Grave

Targeting
No Target
Affects
Self
Turns Visage and familiars invisible, granting Visage movement speed and upgrading its movement type to flying. When Visage or its familiars leave invisibility they deal more damage a duration. Invisibility ends when attacking or casting.
45
100
Notes

QF
Targeting
No Target
Affects
Enemy Units
Damage Type
Magical
After a short delay, the Familiar turns into stone and smashes into the ground, stunning and damaging all targets in the area. The Familiar becomes invulnerable and rapidly regains its health. After a few seconds, the Familiar will automatically leave Stone Form.
14
Notes 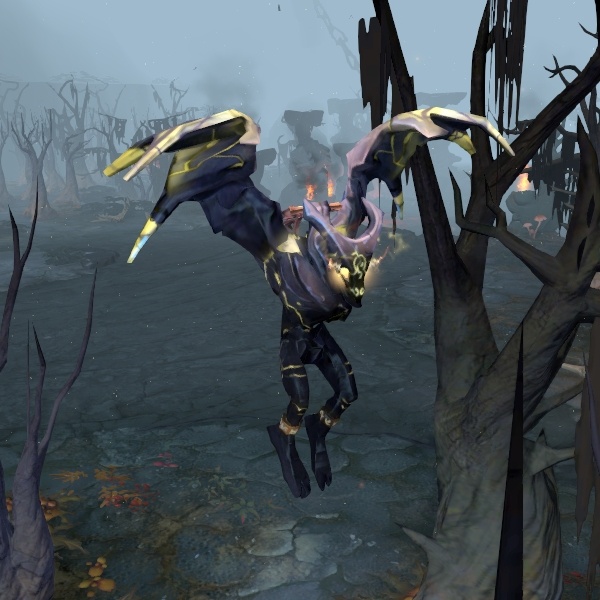