A wiry silhouette hitches forward—uneven of feature and limb, bizarre of gait, relentlessly criss-crossing the battlefield in search of that vital weak point where his talents can do most good, and most harm. Whether broken or mismade it is not clear, but still, none can doubt the power carried in his twisted physique. A long staff thumps the earth as Zharvakko the Witch Doctor advances, deploying a terrifying arsenal of fetishes, hexes and spells. It is a body of magical knowledge learned and perfected over several lifetimes in the island highlands of Arktura, now wielded with precision accuracy against his enemies. Zharvakko can be your best friend or your worst enemy—healing allies and laying waste to all who oppose him.

Witch Doctor is whatever his team needs him to be. Whether aiding his team with gradual healing, stunning and cursing foes to ensure a kill, or destroying enemies himself with a dance by his mighty ultimate, few can match Witch Doctor's versatility.

QC
Targeting
Unit Target
Affects
Enemy Units
Damage Type
Magical
Launches a cask of paralyzing powder that ricochets between enemy units, stunning and damaging those it hits.
20/18/16/14
80/100/120/140
The Witch Doctor recycles the bones of fallen friends and foes, using the powder as part of his arsenal of charms and alchemy.
Notes

WV
Targeting
Toggle
Affects
Allied Units
Witch Doctor focuses his magic to heal nearby allied units.
35/40/45/50
Zharvakko's hocus pocus is not limited only hexxing his opponents and is quite adept at curing ailments.
Notes

EE
Targeting
Point Target
Affects
Enemy Heroes
Damage Type
Magical
Curses all enemy Heroes in a small area, causing them to take a set amount of damage each second, as well as bursts of damage every few seconds based on how much health they have lost since the curse began.
30/26/22/18
105/110/115/120
Certain voodoo magics can make an enemy regret engaging the Witch Doctor.
Notes

DW
Targeting
No Target
Affects
Self / Enemy Heroes
Turns Witch Doctor into a Death Ward, Death Ward has less Attack Speed. He is hidden during this time.
40
150 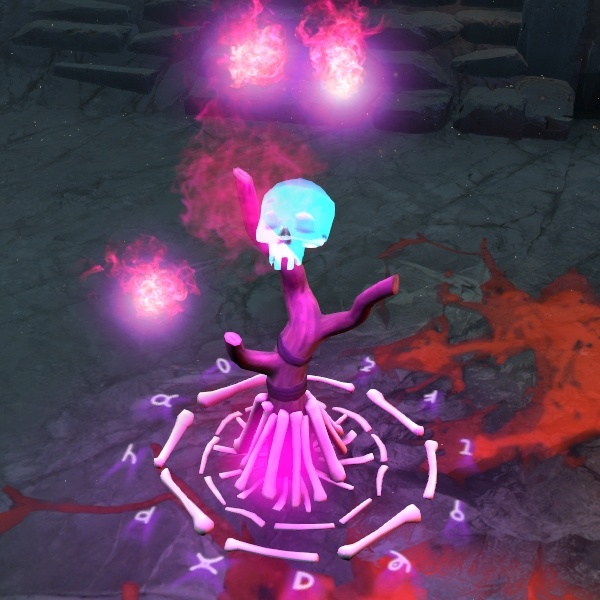