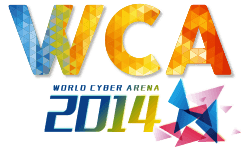 All matches are Best-of-3 except the grand final, which is Best-of-5 with a 1-0 advantage for the team that won the upper bracket final.

*Titan was originally invited to the tournament, however on October 1st, 2014, the former manager of Titan announced that 4 players of Titan would now be participating in WCA together with Mushi under the name Team Malaysia.[1]

34m37s
After internet connection issues during a long Game 1, the manager of Alliance announced that an agreement had been found and that the game would not be finished, with both teams being awarded a victory, putting the best-of-three series' score at 1-1.[2]