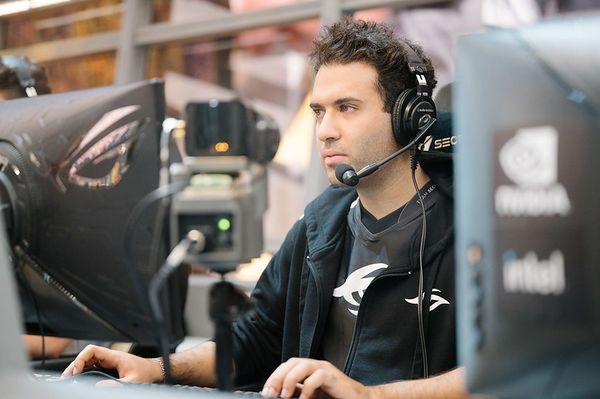 Yazied "YapzOr" Jaradat (born October 17, 1994) is a Jordanian Dota 2 player who is currently on the inactive roster of Team Secret.

YapzOr has been part of the professional Dota 2 scene as early as 2012. But until early 2016, he had always played on either semi-professional or lower-tier teams in Europe. It wouldn't be until he joined No Diggity (later Escape Gaming), under the leadership of syndereN that he would finally make a splash in the scene. Immediately upon joining, the team would go on to win the qualifier for EPICENTER, after having won the open qualifier. They went on to reach second place in DreamLeague Season 5, thus qualifying for the LAN finals in Stockholm. Their next biggest success came with the successful qualification for The International 2016, through the Wild Card. A tough group stage saw YapzOr and Escape Gaming exit The International in the first round of the Lower Bracket, after losing to Fnatic 0:1. Despite the disappointing result, YapzOr had definitely made a name for himself on the international stage.

After The International, Escape Gaming was unable to repeat their good performances in qualifiers and failed to attend any LANs before YapzOr departed the team. In November 2016, he founded B)ears[1], alongside FATA-, 343, Forev, and pubstar Feero. Despite placing high in qualifiers, narrowly failing to qualify for DAC 2017 and the Kiev Major, the team had no notable successes to show for. In April 2017, they would disband, only a few months after their creation.

YapzOr would find a new home only a month later: in May 2017 he joined Team Secret, where he would replace pieliedie[2]. On Team Secret, YapzOr would be reunited with Khezu, with whom he had previously played on No Diggity and Escape Gaming. With YapzOr on the team, Team Secret's results improved drastically, winning their first two qualifiers together, for EPICENTER 2017 and DreamLeague Season 7. They would end in 3rd place at both LAN events, while also coming in second at The Summit 7, behind Virtus.pro. Most notably, Team Secret easily beat the qualifier for The International 2017, dropping only one map during the group stage, thus directly qualifying for the event. At TI7, the team narrowly missed qualifying for the Upper Bracket, finishing 5th in their group, and saw themselves having to fight through the Lower Bracket. YapzOr would again be eliminated disappointingly early by the eventual champions Team Liquid and finished 9-12th.

After TI7, Team Secret had established themselves as giants of the European qualifier scene, having won their first six qualifiers for the Minors and Majors of Valve's new Dota Pro Circuit. Team Secet would be the runner-ups and winners of the first two Majors of the DPC, ESL One Hamburg and DreamLeague Season 8, respectively. This would be YapzOr's third DreamLeague attendance and his first ever LAN victory. The year 2018 started well for YapzOr and Team Secret, where they secured his second LAN victory at Captains Draft 4.0 in Washington D.C., USA.

YapzOr's aggressive playstyle on heroes such as Mirana and Rubick has made him one of the most successful position 4 players currently active. He is also infamous for his greedy playstyle, frequently "kill-stealing" from his cores, and is often ahead of enemy cores in net worth.