Zeus, the Lord of Heaven[edit]

Lord of Heaven, father of gods, Zeus treats all the Heroes as if they are his rambunctious, rebellious children. After being caught unnumbered times in the midst of trysts with countless mortal women, his divine wife finally gave him an ultimatum: 'If you love mortals so much, go and become one. If you can prove yourself faithful, then return to me as my immortal husband. Otherwise, go and die among your creatures.' Zeus found her logic (and her magic) irrefutable, and agreed to her plan. He has been on his best behavior ever since, being somewhat fonder of immortality than he is of mortals. But to prove himself worthy of his eternal spouse, he must continue to pursue victory on the field of battle.

None can hide from Zeus, whether he's calling down a bolt to reveal his surroundings, sending an arc coursing through his nearest enemies, or summoning a terrifying volley of lightning upon all enemies. Wherever his foes are, Zeus will find them.

WG
Targeting
Unit Target
Point Target
Affects
Enemy Units
Damage Type
Magical
Calls down a bolt of lightning to strike an enemy unit, causing damage and a mini-stun. When cast, Lightning Bolt briefly provides unobstructed vision and True Sight around the target in a radius. Can be cast on the ground, affecting the closest enemy hero in a range.
6
120/125/130/135
A shocking punishment for rebellious heathen.
Notes

EF
Targeting
No Target
Affects
Enemy Units
Damage Type
Magical
Zeus performs a Heavenly Jump shocking the closest visible nearby enemy (prioritizing heroes), dealing damage, reducing their movement, attack speed and increasing their cast time. If Zeus was moving forward, he will jump towards that direction. Zeus gets an unobstructed vision around him for few seconds.
26/22/18/14
22/18/14/10
10
50/60/70/80
Notes

RW
Targeting
No Target
Affects
Enemy Heroes
Damage Type
Magical
Strikes all enemy heroes with a bolt of lightning, no matter where they may be. Thundergod's Wrath also provides True Sight around each hero struck. If an enemy hero is invisible, it takes no damage, but the True Sight is still created at that hero's location.
130/125/120
300/400/500
The Lord of Heaven smites all who oppose him, near or far.
Notes

Lightning Bolt on nearby enemies.
45
325
Notes

DF
Targeting
Passive
Affects
Enemy Units
Damage Type
Magical
Zeus shocks any enemy that he attacks or is hit by his abilities, causing damage equal to a portion of their current health.
The air crackles with static when the Thunder God walks the world.
Notes 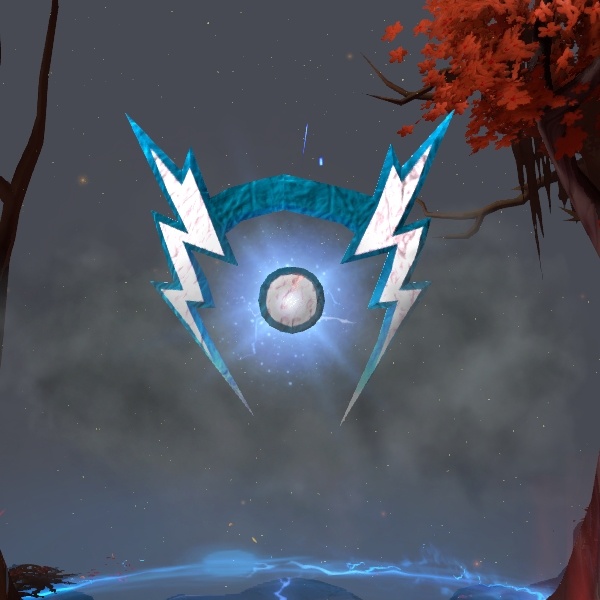