We are currently updating the structure of the wiki which might temporarily result in unusual or missing data. Thank you for your patience during this time!
Liquipedia will soon drop support for Internet Explorer. 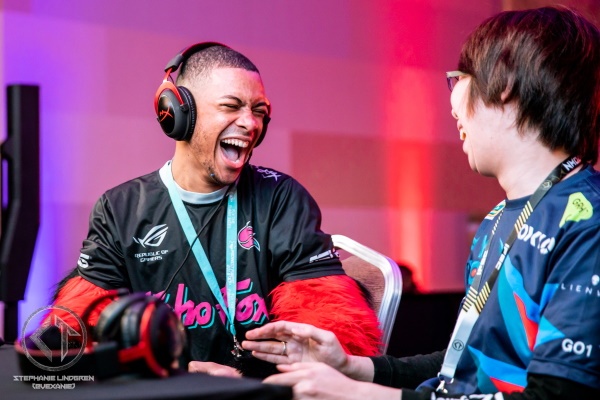 SonicFox is a five-time EVO champion, having won Injustice: Gods Among Us in 2014, Mortal Kombat X in 2015 and 2016, Dragon Ball FighterZ in 2018 and Mortal Kombat 11 in 2019. They are also a two-time Injustice 2 Pro Series Champion in 2017 and 2018. Despite their apparent dominance in these games, they have left their mark in other games like Dead or Alive, Skullgirls (winning the EVO 2015 side-tournament), Under Night In-Birth, Marvel vs. Capcom Infinite and Soulcalibur VI.

In addition to being capable of quickly picking up any fighting game, SonicFox is well known for wearing furry clothing and displaying a carefree attitude at tournaments. They are said to always have fun playing fighting games, and became notorious for easily brushing off losses and bouncing back stronger.

SonicFox first started attending Fighting Game Tournaments from the age of 13, with their first game being Mortal Kombat where they quickly garnered a reputation as an aggressive Mileena and Sonya player. However it wasn't until Final Round 17 in 2014 where they first gained major attention from the NRS community. At the event (now sponsored by Revolution Gaming) they beat both 16-Bit and Waffles in the Injustice: Gods Among Us and the Mortal Kombat finals respectively, winning both Tournaments and being one of the first players to win two Netherrealms Fighter Tournaments at a Major event.

At EVO 2014 SonicFox made their debut at the Mecca of the FGC and was touted as a potential contender for the Injustice: Gods Among Us crown. SonicFox managed to progress all the way to the Winners Finals where their Batgirl would lose to NRS veteran Pig of the Hut's Zod in 2-3 games. Despite this they carved past MIT 3-0 to setup a rematch against Pig of the Hut for the title. SonicFox dominated the proceedings, outmatching their opponent in nearly every game to reset the bracket, and eventually win the whole tournament without losing a single game in the final to Hut 3-0 in the first set and 3-0 in the second.

After the release of Mortal Kombat X SonicFox sought to continue their form into the new game. With ESL announcing the new MKX Pro League and Netherrealms supporting the competitive scene monetarily, everyone was looking to gain a share of the new Prize Money on offer. With new sponsorship from Critical Reaction, they immediately followed off from their Injustice success winning the ESL Fatal 8 exhibition and would subsequently win the first Season of the new MKX Pro League, defeating MIT and REO in the finals respectively. Coming into EVO 2015 all eyes were on SonicFox to see if they would retain their NRS Crown, they would go on to win once again coming from the Losers Bracket, defeating A F0xy Grampa in another reset to claim their 2nd EVO Championship.

More major wins would follow including back-to-back ESL Pro League titles at the Season 2 and Season 3 finals, as well as CEO 2016. SonicFox had all the momentum going into EVO 2016 but Tekken Master, a relatively unknown player from Bahrain gave them a run for their money for the first time in an EVO final. Shortly after Tekken Master reset the bracket and took the lead in the following set, SonicFox famously took off their Fur-Hat (an iconic symbol for them) and proceeded to take the match to a deciding game, switching from theirErron Black to Alien they managed to win the game and the Tournament once again, gaining their 3rd straight EVO Championship and cementing their status as the best MKX player in the world.

With the release of Injustice 2 in 2017 also came the launch of the Injustice Pro Series circuit. With support from Major esports organisation Echo Fox, SonicFox continued to dominate, winning a total of five IPS Premier events which culminated to the Grand Finals in Los Angeles where they beat Semiij in the final to win a whopping $120,000 (their largest career win to date) while only losing a single game to their Final opponent in the Winners Finals.

There were moments of vulnerability though, earlier in the year they failed to make an NRS EVO Grand Final for the first time in their career, losing to Semiij in the Losers Bracket after being knocked out of Winners by eventual Runner-Up HoneyBee, finishing 5th-6th overall. A similar placement followed at the ELEAGUE World Championship, where they lost to ForeverKing in the Losers Bracket.

After these losses SonicFox set about finding success in other Fighting Games, eventually picking up Dragon Ball FighterZ and deciding to fully commit themself to the game in preparation for EVO 2018 while having Injustice 2 as their side game. They immediately started to get high placements for DBFZ, finishing 2nd at Final Round, 1st at Combo Breaker, 1st at DreamHack Austin and 2nd at the Summit of Power. They also set about competing in the Dragon Ball FighterZ World Tour, winning the 2nd SAGA event at VSFighting 2018 which automatically qualified them for the World Finals (to be played in 2019). Coming into EVO 2018 DBFZ was the most signed up for tournament at the event. Despite focusing on Dragon Ball for most of the year, SonicFox still achieved 3rd place in the Injustice 2 tournament losing to Tweedy in the Losers Final. But their attention would fully shift to the next tournament in their attempt to win DBFZ in its debut year at EVO. They subsequently made it to the Winners Finals where they faced their rival GO1 in a highly anticipated game. SonicFox beat them 3-0 to secure a place in the Grand-Final, only to meet GO1 once again. After GO1 reset the bracket SonicFox requested to switch sides in compliance to the tournament rules. SonicFox then emphatically beat GO1 3-0 to win an unprecedented 4th EVO championship and become a FGC legend on arguably one of the biggest stages in EVO History.

After their newest EVO Crown, SonicFox has since picked up Soulcalibur VI where took little time to make Finals at major tournaments, eventually winning Canada Cup 2018. At the same time they would manage to qualify for the 2018 IPS Finals and go on to retain their crown, beating Rewind in the Grand Final to scoop $40,000 in Prize Money.

At the beginning of 2019, SonicFox had immediately set their sights on succeeding in Mortal Kombat 11, the newest game in the franchise announced in December 2018. At the first-ever Beyond the Summit event for a Mortal Kombat game (and the first major event for MK11) Summit of Time, SonicFox lost only one game in the Elimination Bracket to win the event. After winning MK11 at CEO 2019, SonicFox made two Main Stage EVO Grand Finals for the first time in their career at EVO 2019, finishing 2nd to GO1 in Dragon Ball FighterZ, and winning their fifth EVO title for Mortal Kombat 11 (their third consecutive title in the Mortal Kombat series).

Pig of the Hut