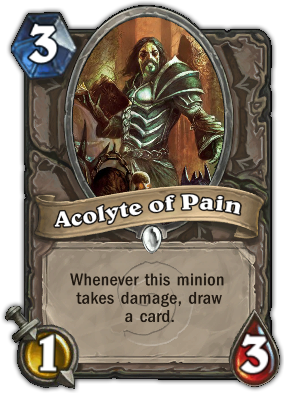 3
Effect
Whenever this minion takes damage, draw a card.
Card Information
Class:
Neutral
Type:
Minion
Subtype:
General
Rarity:
Common
Set:
Classic
Artist:
Dave Kendall
Description
He trained when he was younger to be an acolyte of joy, but things didn't work out like he thought they would.

Acolyte of Pain is a neutral minion card that lets you draw a card every time it takes damage.

Due to the draw mechanic on the card, it can maximize it's value in a Mage deck, where you can deal damage to it with your Fireblast.

Let the pain speak to me.
Summon ()

Acolytes (also known as "the Damned") are human beings who have given themselves over to the power of the Lich King and Scourge. These bitter, fanatical men and women will stop at nothing to promote the Lich King’s will and maintain the secrecy and dominance of the Cult of the Damned. They view their own deaths and the possibility of becoming undead as the ultimate rewards for service to Ner’zhul.

The unsummoning of buildings allows the Acolytes of the Scourge to reduce fully constructed buildings to their base forms of matter and energy in order to recover some of their resources. Some of this matter and energy is lost in the conversion, as are most things that are pulled through the Great Dark Beyond.

Acolytes who wish to serve as the eyes and ears of Ner’zhul are capable of shedding their bodies and taking on the forms of invisible Shades.

Novice priests are most often used in grunt work, summoning and repairing buildings and structures with their magic. Occasionally, an acolyte enters battle as a medic, though few are strong enough to actually engage directly in battle. They are typically dressed in dark robes covered in arcane writing. Most of their face is covered by a dark scarf and the hood of their robes; they clutch wicked wavy-bladed daggers. The acolyte is absolutely pitiful in battle, and so must let other Forsaken forces fight for them. Their main role is to summon buildings and repair damage to vehicles and other undead units. If pressed, the acolyte casts spells like "Lesser Death Coil" or stabs with their dagger.

Acolytes of the Alliance are people training to be priests or priestesses and work under a priest or priestess. These acolytes are not associated with the undead, and instead practice the same magic as their mentors. [1]