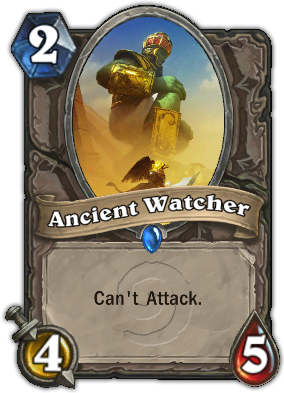 Cards that can't attack are usually not that common, as they require another card to be of any use. It can either be given taunt by a card like Defender of Argus or Mark of the Wild, or it can simply be Silenced to remove its effect.

It can be very powerful in a warlock deck that contains a Void Terror, as it can basically give you a 7/8 minion on turn three. Combine that again with a Flame Imp and you have a turn three 10/10 demon on the field.

Cards that grant Taunt; such as the Druid spell Mark of the Wild can make use of this card to force the enemy to attack this target.

This card's art depicts one of the numerous living giant statues in the Tol'vir zone of Uldum. Creatures like the one on the card are seen in numerous pyramids including the dungeon Halls of Origination. The card also shows a desert and a Tol'vir statue below the actual Ancient Watcher. The ancient watchers encountered are also either malfunctioning or pretending to be inactive, until you come close enough for them to attack you. [1]