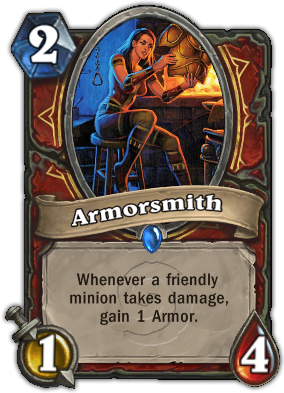 Armorsmith is a Warrior class minion card, with Rare rarity.


Its effect occurs whenever a friendly minion takes damage gain +1 armor: this also includes damage which kills a minion and damage taken by the Armorsmith herself. Any damage that removes Divine Shield on friendly minions will not trigger the Armorsmith's effect, as the damage isn't done directly to the minion.

Armorsmith is mostly used in control decks, as the card synergies with Warrior spells like Whirlwind. It also has high health, which allows it to clear 1HP minions while providing extra armor to the player. This sometimes stalls the game out long enough for control players to get big and costly minions in play. This armor can also be used to fuel powerful Shield Slams.