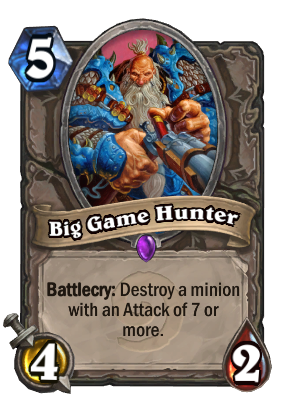 Big Game Hunter is a Neutral class Minion card. Its effect upon being placed onto the field is to destroy a minion with an Attack of 7 or more (if you have the only 7 attack minion on the field Big Game Hunter will target YOUR minion).

Situationally useful card. It can be useful for taking down an extremely powerful threat, however there are many decks that do not really use Minions with 7 or more attack, or with only one such minion that is usually there more for an ability than for battle.

Abusive Sergeant or Dark Iron Dwarf can have their battlecry abilities targeted to enemy minions, pushing for example hard to deal 5 or 6 Attack minion to kill range for Big Game Hunter.

I've got the beast in my sights!
Summon ()

This card refers to a series of quests from World of Warcraft, where the player is tasked by Hemet Nesingwary with hunting down rare or elusive animals. Since then, this neutral faction of beast hunters has made its way to the new lands unveiled with each expansion in order to hunt the dangerous beasts found there, while offering quests to players to do the same.

In the classic game, there were quests in Stranglethorn to hunt dangerous wild beasts for sport. They eventually chained to an elite boss tiger, that was difficult to solo at the time. In The Burning Crusade, a camp was introduced in Nagrand with new beast hunting quests; Wrath of the Lich King saw a new camp in Sholazar Basin; and Mists of Pandaria saw mighty beasts hunted in Valley of the Four Winds. Warlords of Draenor saw the Alliance and Horde inviting Nesingwary to the alternate universe Nagrand, however when they revealed his invitation was not to hunt wild game but rather the wolves of the Warsong clan, he refused, and consequently did not offer any quests. [1]