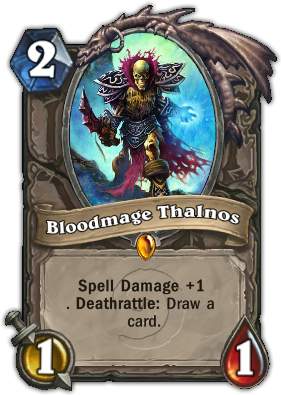 Bloodmage Thalnos is a Neutral class Legendary Minion card. It gives you +1 Spell damage and when this card is destroyed you draw a card.

We hunger for vengeance.
Summon ()

Bloodmage Thalnos was a level 31 elite skeleton mini-boss found in the Graveyard of the Scarlet Monastery instance. With the revamp of the dungeon for Mists of Pandaria, he was renamed Thalnos the Soulrender, and generally overhauled.

Thalnos' origins are disputed. His title appears to suggest he was a blood elf in life, although some say the lore is hard-pressed to explain the presence of a blood elf in the monastery at that time, and that he was more likely a human. The original version used mostly Fire spells to deal damage, while the new version uses necromantic Shadow magic, raising fallen crusaders to his aid and ripping the very souls from his enemies. [1]