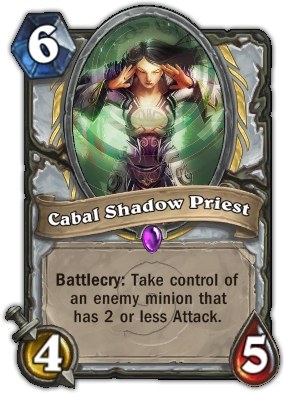 Cabal Shadow Priest is a Priest class Minion card. Its effect is upon being played to the battlefield you can take control of an enemy minion that has 2 or less Attack. The minion cannot attack right away.

Let me change your mind!
Summon ()

The Cabal is a dark cult that is a sub-organization of the Shadow Council and operates exclusively in Outland. They are led by Grandmaster Vorpil and Blackheart the Inciter. The organization's members have holdings in the Bone Wastes and external ruins of Auchindoun in Terokkar Forest and in the Shadow Labyrinth of Auchindoun.[1]