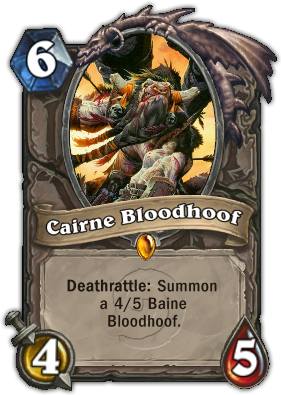 Cairne Bloodhoof is a Neutral Minion card. Its effect is that upon its own death you Summon a 4/5 Baine Bloodhoof.

This is a very strong card, commonly used in the past in majority of control decks in constructed format. Cairne Bloodhoof is also an absolute top pick in Arena, as it provides a minion with close to perfect stats and good resistance to enemy minions and removal spells.

Cairne Bloodhoof provides you with a 4/5 minion that is already hard to remove due to 5 toughness (as lot of tools used for removal do 4 damage, like Swipe, Death's Bite, Truesilver Champion), and even if opponent deals with the first one - his deathrattle spawns second 4/5 minion, called Baine Bloodhoof. This makes this card essentially 2*4/5 minion, if not silenced.

It's also worth a mention this is insanely strong card against opponents playing priest hero, as Cairne Bloodhoof can't be removed by either Shadow Word: Pain or Shadow Word: Death due to its 4 attack.

Take heart, young one. The Earthmother is near.
Summon ()

Garrosh! You are not fit to rule the Horde!
Alternative summon (when the enemy playing Garrosh) ()

Cairne Bloodhoof is the father of Baine Bloodhoof and led the combined Tauren tribes. Upon meeting and adventuring with Thrall he ended up pledging the Tauren to the cause of the Horde. He died in a duel versus Garrosh Hellscream who, unknowingly, had poison on Gorehowl, his weapon. [1]