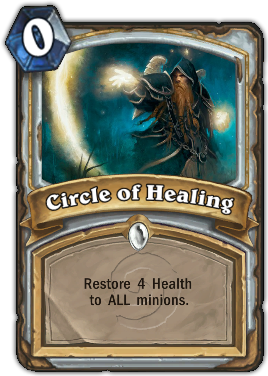 Circle of Healing is a Priest class Spell card. Its effect is to restore 4 Health to all Minions.

Circle of Healing is considered a core card in almost every Priest deck due to its versatility. It can be used as a board clear in combination with Auchenai Soulpriest or as a tool to draw cards with Northshire Cleric.

Since Priest decks usually include high HP minions like Deathlord or spells like Power Word: Shield or Velen's Chosen, it can also be used to heal up your board after having done several trades.

One of the most common ways for Priest to establish early board control is to play an Injured Blademaster and heal it with Circle of Healing.

In special situations Circle of Healing can be combined with Wild Pyromancer, Northshire Cleric and another spell to draw several cards in a single turn. Keep in mind though that this can easily lead to fatigue or overdrawing.