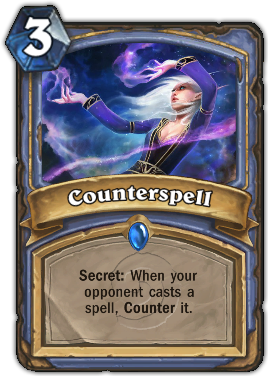 3
Effect
Secret: When your opponent casts a spell, Counter it
Card Information
Class:
Mage
Type:
Spell
Subtype:
General
Rarity:
Rare
Set:
Classic
Artist:
Jason Chan
Description
What's the difference between a mage playing with Counterspell and a mage who isn't? The mage who isn't is getting Pyroblasted in the face.

Counterspell is a Mage class Spell card. Its effect is when your opponent casts a spell, you can disable or Counter it rendering its effect useless.

Counterspell can be a hard secret to play effectively. Generally you want to counter a spell that is at least evenly costed at 3 mana, you need good knowledge of Hearthstone's cards to know what spells your opponent can run, what cards are popular in the metagame and what would be a good play for your opponent in his/ her next turn. Playing Counterspell just to use up your mana can be a bad choice especially in decks that aim to overpower their opponent with lategame threats.

There's currently two styles of playing this card. One uses Counterspell in combination with Kirin Tor Mage to gain tempo, protecting your minions from cheap removal and board clears. The other uses Counterspell in a lategame deck saving it until it can protect high impact minions, like Archmage Antonidas, from hard removal.

Key spells to counter when aiming for board control

Counterspell is especially potent versus Pyroblast and Mind Control. Since these spells cost 10 mana, your opponent will likely have to take another turn to check for Counterspell or suffer a painful loss. Weakness lies in Counterspells' 3 mana cost when there's decks that play a bunch of 0 and 1 cost spells or even no spells at all. Tip! It's important to keep track of The Coin if your opponent went second, it will often be used to check your secret and losing 3 mana and a turn on countering a 0 mana free card will set you back a lot!

Patch 1.0.0.4944, in the aggressive metagame Mage secrets besides Ice Block and Ice Barrier are difficult to play. They're rarely used on a competitive stage.