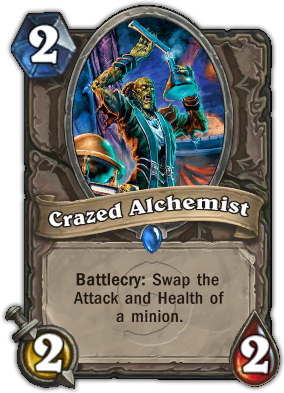 Crazed Alchemist is a Neutral class Minion card. Its effect upon being played to the battle is to swap the Attack and Health of a minion.

Crazed Alchemist is totally reliant on synergy with (or against) other minions to be effective. Against a 0 attack minion such as Shieldbearer or Lightwell, the Alchemist is a 2 mana removal spell that gives you a free 2/2. Note that the swapping mechanics takes all buffs on the minion into account. A Flametongue Totem under the influence of a Stormwind Champion will no longer die from Crazed Alchemist's battlecry. Similarly, while technically being an 0/5, you can not kill a Lightspawn in this way either, since the minion's buffed stats are used.

In other cases, it can keep a Taunt or Enrage minion alive an extra turn or make durable minions like Fen Creeper swing for a lot of damage. That being said, given its extremely situational nature, and with only 2 allowed in a constructed deck, it's probably better to rely on the Alchemist as a bonus, not a core part of a strategy.