The Curse of Naxxramas is a Hearthstone Solo Adventure released 22 July 2014. The adventure consists of five different wings that were released weekly, full adventure was playable 20 August 2014. It was simultaneously released on Windows, OS X, and iPad. Included in the expansion there is a single player adventure mode in which players play against familiar bosses from the original dungeon, found in World of Warcraft, new cards, and a new game board.

The Curse of Naxxramas is the first event in which new cards were added to the game, excluding the 2013 Blizzcon ticket reward Elite Tauren Chieftain.

Many of the cards in the set are focused around the concept of deathrattle. There is a total of 30 new cards.

The Solo Adventure mode features 5 wings, one of which is free and each one after can be unlocked with either 700 gold or money. These wings were released one wing at a time, for five weeks after release. Each wing features a series of bosses. After beating each boss, you receive one card. After each wing, you receive one legendary card. In addition, there are nine class-specific challenges that give one class-specific card after defeating them.

This expansion also has the first new game board since the beta. 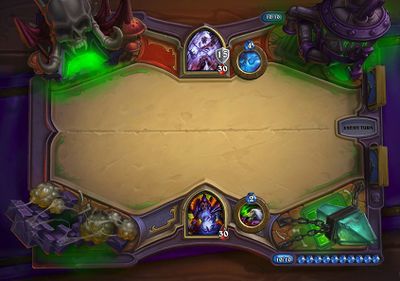