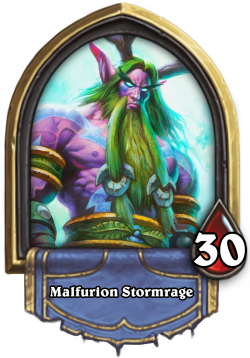 Druids generally try to get a lot of strong cards which cost a lot of mana in their deck. Cards such as Innervate, Wild Growth and Nourish allow Druids to quickly gain more mana crystals over the game, enabling them to enter the late game sooner than other classes do. Therefore, a lot of late game cards are commonly found in Druid decks.

We are the preservers of the balance, now and forever, as Malfurion lies in the Dreaming. Never forget this. - Kal of Dolanaar

Druids are keepers of the world who walk the path of nature, following the wisdom of the Ancients and Cenarius, healing and nurturing the world. To druids, nature is a delicate balance of actions in which even the smallest imbalance can create storming turmoil from peaceful skies. Druids draw their power from this wild energy, using it to change their shapes and command the forces of nature.[1] Traditionally druids chose the path of a specific animal totem. Since the invasion of the Burning Legion, however, most druids have undergone a number of reforms, including encouraging the study of magic from all totems. Druids who do this are known as druids of the wild.[2] [3]