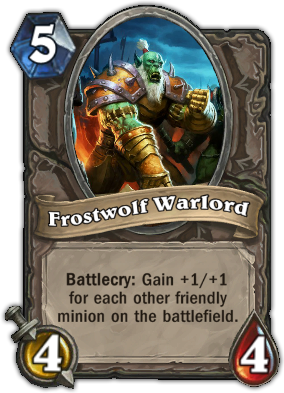 4
Effect
Battlecry:Gain +1/+1 for each other friendly minion on the battlefield.
Card Information
Class:
Neutral
Type:
Minion
Subtype:
General
Rarity:
Free
Set:
Basic
Artist:
James Ryman
Description
The Frostwolves are locked in combat with the Stormpike Expedition over control of Alterac Valley. Every attempt at peace-talks has ended with Captain Galvangar killing the mediator.

Frostwolf Warlord is a Neutral class Minion card. When it is played to the board it gets +1 Attack and +1 Health for each other friendly minion on the battlefield.

Remember to play any other minions you are planning to play on the same turn before you play the Frostwolf Warlord. Also if your minions will die when you attack with them play this card before any minions will be killed.

This card can be used in combination with a card like Boar which is a weaker minion card but is easily summoned and only costs 1 mana crystal meaning it's an effective way to buff the health and attack of Frostwolf Warlord. Similarly any cards that summon other minions, like Imp Master, offers quickly more value for this minion.