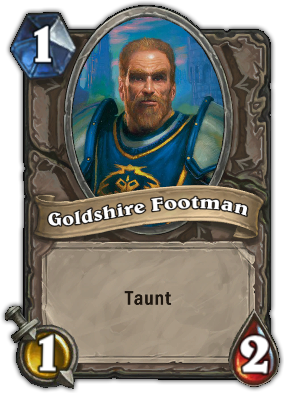 2
Effect
Taunt
Card Information
Class:
Neutral
Type:
Minion
Subtype:
General
Rarity:
Free
Set:
Basic
Artist:
Donato Giancola
Description
If 1/2 minions are all that is defending Goldshire, you would think it would have been overrun years ago.

Goldshire Footman is a Neutral class Minion card. Its effect is that it forces enemy minions, or the enemy hero to attack this minion. If there are multiple minions with taunt you can only attack those with taunt.

A common Taunt Minion. With 2 Health this card can be a decent first turn play, as for your opponent to deal 2 damage on the first turn they must expend their coin, else they can't destroy this minion. Apart from the really early game, this card can offer little except for something like a sacrifice, forcing your opponent to attack this to save another minion. The 1 Mana cost of this card makes it easy to play this card in such a situation in the lategame alongside other cards.