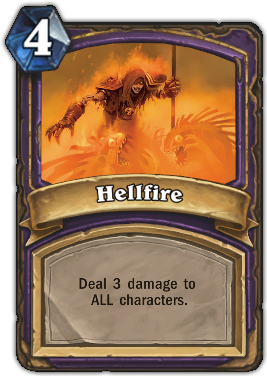 Hellfire is a Warlock spell that deals three damage to all characters on the board, including both heroes.

Hellfire is an area of effect damage spell, which are commonly used when clearing the board is advantageous. As the spell has friendly fire it should usually be played before placing new minions but after your existing minions have attacked the enemy. In common warlock deck type, Murloc deck, Hellfire is problematic as Murloc type minions have low health. Situationally the spell can be used as a finisher, though.