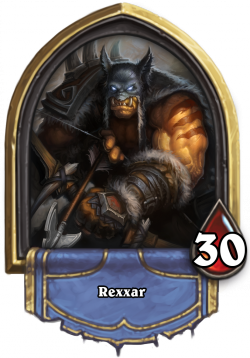 The Hunter class is represented by Rexxar and Alleria Windrunner. Hunters are known as the tamers of the wilds, commanding various beasts to do their bidding. They are also masters of all kinds of ranged weaponry such as bows or guns and are adept at using traps to harm their foes.

The most defining aspect of the Hunter class is their hero power Steady Shot, which is the only purely aggressive hero power in the game. Thus most decks, since they synergyze with the hero power the best, aim to finish the game as fast as possible coupled with staple aggro cards such as Leper Gnome and Leeroy Jenkins. Another popular decktype aims for a more control-oriented aggression using strong beast cards for heavy synergy.

Hunters can really punish their opponents for overextending on the board through spells like Explosive Trap and Unleash the Hounds, should they play many minions at the same time.

Hunter decks tend to have a limited amount of direct damage in them, which makes them weak against classes with access to strong healing spells like Warrior (through Armor) and Priest. They also lack healing themselves, so it is possible to get burned down first, if the opponent runs an aggressive deck as well.

A secret is an ability where a card is played in a condition that the opponent is not able to see its effect. Rather than having an instant effect, secrets revolve around the mechanic to counter actions from the opponent.

Undraftable cards are cards that are not drafted into a deck but are instead created as a result of other cards.

Hunters are stalkers in the wild, living on their knowledge of survival and skill with a bow or rifle. They are deeply in tune with nature and some of its mightiest beasts are their allies. Of Azeroth's many creatures, few can resist the hunters' call, and fewer can survive their fury. Hunters are as varied as the world's many climates, but they are universally renowned for their amazing abilities to find their prey and bring it down. They come from any race (players are restricted to eleven races, see below), though certain races naturally excel at the hunter's profession. Most hunters seek to aid the balance of nature along with their druidic allies.

Hunters are skilled in stealth, slipping through the woods like a ghost. Orcs of the Horde first learned the ways of the hunter from forest trolls on Lordaeron and tauren have been masters of the hunt since the dawn of the world. Like the shaman, hunters call upon the spirits of the land, wind, and fire to aid them in their hunts and tasks. Their spells focus on the elements and the land.

The hunter is one of the oldest classes in history. They represent a deep connection between man and beast, and the hunters of Warcraft are not merely individuals who track animals and slay them for food, but custodians of balance. They understand the natural circle of life and death and the part they must play in maintaining it not simply as researchers, but as active participants. The "Hunt" is venerated, and the prey they choose to stalk is given as much respect as the predators hunters choose to learn from and embody.

All hunters create lifelong friendships with animal companions, who are also often their best and only friends, if the stereotype of the reclusive huntsman is to be believed. Hunters come in all shapes, forms, sizes, and specialties. Hunters are a curious mix of mysticism and rough wilderness know-how. They can learn to mystically align themselves with the aspects of various animals to assist them: the sharp eyes of a hawk and the swiftness of a cheetah; they gift themselves with a higher resistance against the dangers of the most important thing of all in the rites of a hunter — the very wilds they live in. Hunters use magically empowered traps to maim and snare their prey. They have various shots imbued with magic or explosives to slow, poison, handicap, and disorient their targets. They can even hold their breath and slow their heartbeat to a highly infrequent, inconsequential tap to give their pursuers the impression they are dead. [1]