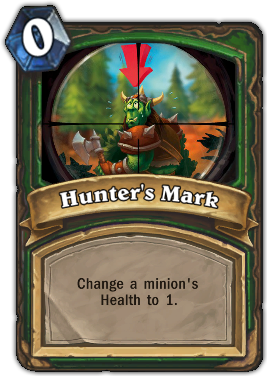 Hunter's Mark is a Hunter class Spell card. Its effect is to change a minion's Health to 1.

The main use of Hunter's Mark is to use it as a type of indirect removal spell. By using it on an opponent's minion with a lot of health, you weaken it tremendously so that any other attack, even a from a Boar or Snake, can easily take it out.

Using it on certain minions can be advantageous for different reasons:

The effect from this card can be removed by Silence.