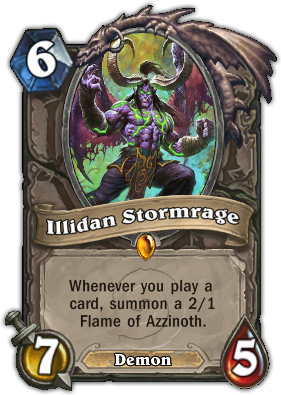 Illidan Stormrage is a Legendary Neutral Demon type Minion card. When it is on the board and you play a card summon a 2/1 Flame of Azzinoth.

Illidan was a night elf, twin brother of Malfurion Stormrage and the first demon hunter. He fought in the War of the Ancients, where he sided with Sargeras to gain the power to defeat the Burnning Legion. For his actions during the war, as well as for the creation of the second Well of Eternity, he was imprisoned for ten thousand years by his brother.

During the Third Battle, he was released, but once again he chose his own way. He absorbed the power of the Skull of Gul'dan and became a hybrid between Night elf and demon. [1]