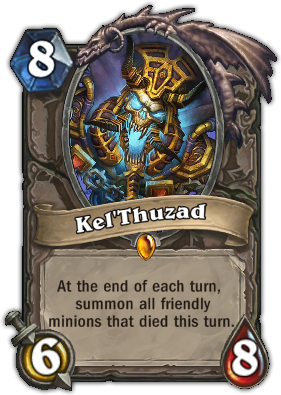 8
Effect
At the end of each turn summon all friendly minions that died this turn.
Card Information
Class:
Neutral
Type:
Minion
Subtype:
General
Rarity:
Legendary
Set:
Naxxramas
Artist:
Chris Robinson
Description
Kel'Thuzad could not resist the call of the Lich King. Even when it's just a robo-call extolling the Lich King's virtues.

Kel'Thuzad is a Legendary neutral class minion card from the Curse of Naxxramas set. When he is on the board every friendly minion that was killed during the turn is resummoned at the end of the turn.

Unanswered Kel'Thuzad very quickly locks the opponent out from the game as minions can be used freely to trade with enemy minions and have them alive again at the end of each turn. Several Paladin and Druid decks have played it with medium to large minions like Sludge Belcher or Ancient of War.

Minions with Deathrattle can have their effects played multiple times as for example Loot Hoarder will draw a card each time it dies and be resummoned again at the end of the turn as long as Kel'Thuzad stays in the play.