League of Explorers is the third Hearthstone Adventure. It consists of four wings where players battle against new opponents and bosses. The first wing, Temple of Orsis, was released on November 12, 2015 and the last wing was available from December 10, 2015 onwards. [1] [2]

League of Explorers Hearthstone Adventure consists of four different wings where players are accompanied by the members of the League. Completing each wing also opens two or three Class Challenges where players battle the enemies of the wing with special pre-made decks.

League of Explorers introduces a new kind of single player challenge, an Escape. Instead of battling against an opponent just as in regular Hearthstone match players have to survive a set number of turns to win the challenge.

In the Temple of Orsis player is introduced to Reno Jackson, a careless adventurer.

When player has beaten all the challenges of Temple of Orsis he or she is rewarded with two copies of Ancient Shade and a legendary card Reno Jackson.

In the second wing players have a dwarf archaeologist Brann Bronzebeard to guide them through Uldaman.

In The Ruined City players join the gentleman Murloc Sir Finley Mrrgglton on an expedition to habitat of Nagas and Murlocs.

The rewards for defeating the challenges of The Ruined City are two copies of Jungle Moonkin and a legendary card Sir Finley Mrrgglton.

In the final wing of League of Explorers players return to The Hall of Explorers to unite the pieces of the Staff of Origination with Elise Starseeker.

Defeating the challenges at The Hall of Explorers awards players with two legendary cards: Elise Starseeker and Arch-Thief Rafaam.

In total there is 43 new cards, five of which are legendary.

League of Explorers adds a new Keyword, Discover, into the game. Triggering the Discover causes player to be presented three random cards to choose from to his or her hand.

League of Explorers added two new interactive game boards to the board pool. 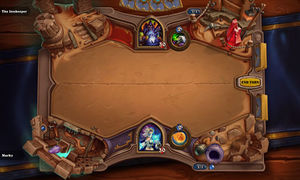 The game board 'Excavation' 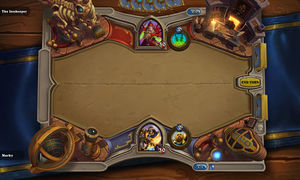 The game board 'Hall of Explorers'