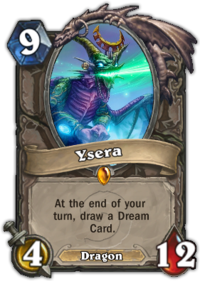 Example of a Legendary card

Legendary cards are the most rare type of card. They're usually powerful and have something unique that sets them apart from others. They're also unique in that you can only have one of each Legendary in any one deck (all other cards have a max of two per deck). This also means that owning more than one of the same Legendary has no purpose. They are Expert cards, as marked by the gemstone that all Expert cards have in the center of the card, with an orange color classifying it as Legendary. They also have a dragon on top, just like Elite and Rare monsters had in World of Warcraft.

You can obtain a Legendary card just like any other Expert card, in that they're found in Card Packs and crafted from Arcane Dust.

However the chance to obtain at least one Legendary in any one pack is low, about 5.5%, or about 1 in every 18 packs.[1]

They also cost an immense amount of Arcane Dust, 1600. Crafting a gold version of a Legendary costs 3200.

You can draft them in Arena, but the chance for one to appear is very low. The chance is slightly increased at the times when you are guaranteed to be presented with at least Rare or higher cards. This occurs on the 1st card you draft, 10th, 20th, and 30th (final) card you draft.

So far, all Legendary cards you can own in your deck are minions, there are no Legendary spells. There is one unique exception, Lord Jaraxxus, that is still technically a minion you place on the battlefield, but immediately is destroyed and replaces your hero with Lord Jaraxxus. There is also Ashbringer, which is a weapon that is equipped when Tirion Fordring's Deathrattle occurs.