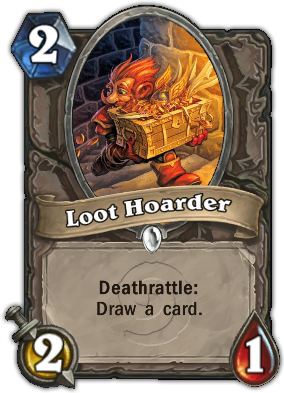 Loot Hoarder is a neutral minion card. When this minion dies you draw a card.

Loot Hoarder is a common early game minion and it is somewhat comparable to Novice Engineer. Loot Hoarder has two attack, giving it the ability to trade upwards against common 3/2 minions, but its one health makes it vulnerable against the Hero Powers of Mages, Druids, Paladins, and Rogues. Loot Hoarder's two attack often forces the opposing player to deal with it quickly and playing it on an empty board can be an early momentum builder.