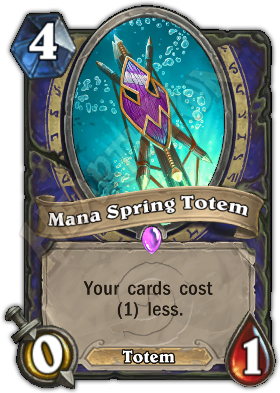 Mana Spring Totem is a card that was mentioned as being removed in the unofficial patch notes of the first Alpha Patch and was replaced by Far Sight.[1] It was a Priest class Spell card of Common rarity. It made all your cards cost 1 mana less. It was removed for being game-breaking; in a combo with Knife Juggler and 2 Youthful Brewmaster, it had the possibility of gaining infinte dps.