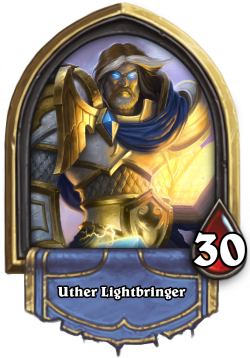 Paladins are considered a hybrid class. Paladins are able to heal and protect their allies while also able to damage their opponents.

The Paladin is a well rounded class, which focuses on limiting the opponent to pull out their strong monsters, while maintaining their own ability to do so. Many minions of the Paladin revolve around the Divine Shield mechanic to summon a minion and to make it able to negate one instance of damage taken. Divine Shield can also be combined with Taunt to create a board that is hard for the opponent to wipe.

A secret is an ability where a card is played in a condition that the opponent is not able to see its effect. Rather than having an instant effect, secrets revolve around the mechanic to counter actions from the opponent.

Paladins are the virtuous defenders of the weak, and tireless, unfaltering enemies of the undead. Mixing elements of the warrior and the clerics of the Holy Light, the paladin is a tough melee fighter. The tradition of the Holy Light is unique to a few of the Alliance races (humans, dwarves, and draenei) and the blood elves and tauren of the Horde.

The paladin is a "warrior of the Holy Light". They uphold all that is good and true in the world and revile all that is evil and sinister, especially undead and the Burning Legion. They offer succor to the beleaguered and smite their enemies with holy fervor. They are particularly potent against undead, as these creatures threaten the goodly races and the Holy Light burns them terribly. The presence of any evil is reprehensible to paladins, but they focus their efforts on destroying undead and demons.

These warriors uphold the tenets of the Holy Light and defend the Alliance from the predations of any threat to their peoples. Found in almost every corner of Azeroth fighting the forces of evil and barbarism, these stalwart warriors of faith ceaselessly uphold their vigil against demonic forces from beyond the Dark Portal. Paladins are the embodiment of good and selfless dedication to the protection of their peoples. They help the innocent and punish the wicked. As such, paladins are generally of good alignment.

There are however, also Fallen Paladins such as those in the Scarlet Crusade.

During the Second War, some paladins' eyes glowed with inner power of the Light, such as the paladin Turalyon. This is not the case for all paladins, though it occurs in game with certain paladin armor sets. [1]