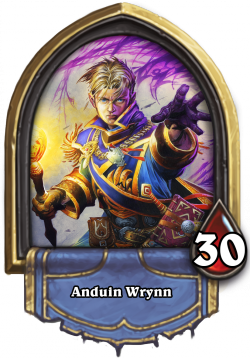 The Priest class is represented by Anduin Wrynn. While both Paladins and Priests draw their power from the Light, as a pure spell-caster Priest also has access to powerful shadow spells that iconically turn the enemies' power against them. Those two sides of the Priest are represented by the contrasting hero powers Lesser Heal and Mind Spike (while in Shadowform).

Priests are good at controlling the board and keeping their minions alive for a long time by healing them up with their various healing spells such as Lesser Heal, Holy Nova and Circle of Healing. This makes higher health minions more valuable since they can eliminate enemies and be easily returned back to full condition. Priest decks can be built in a number of ways to beat different decks. While Auchenai Soulpriest, Holy Nova and Shadow Madness can stop aggression dead in its tracks, late game oriented Mind Control, Shadow Word: Death and Thoughtsteal can neutralize strong enemy minions and even turn them against their owners.

Auchenai Soulpriest + Circle of Healing deals 4 damage to everything on the board (including your minions!) for 4 mana, which is good for wiping out early aggression.

Auchenai Soulpriest + Earthen Ring Farseer. The battlecry of the Farseer deals 3 damage, making it a stronger version of the SI:7 Agent.

Injured Blademaster + Circle of Healing gives you a 4/7 minion as early as turn 2 (With Coin).

Ancient Watcher + Silence gives you the equivalent of a Chillwind Yeti as early as turn 2.

While Priest decks can be built to counter specific decks and thus can be very useful in tournament play where it is possible to know what you are going against, they struggle at being consistent against different types of decks simultaneously. This makes them weak at climbing the ladder. They can also be easily overwhelmed by aggressive decks since they rely on combinations of multiple cards which they might not be able to draw fast enough in the early game. Priest lacks strong heals like Holy Light and Healing Touch which would help them get back in the game after having stabilized against aggression. Another problem is the popularity of mid game minions with 4 attack (such as the Chillwind Yeti, Twilight Drake and Druid of the Claw), since they cannot be easily removed by Shadow Word: Pain or Shadow Word: Death.

Priests practice a complex, organized form of spirituality. It can be built around moral philosophy, the worship of a particular deity (such as Elune), and/or idol worship. This is in contrast to the reverence of the elements that shamans practice or the close divine connection with animals and the wilderness that druids maintain. Priests serve not only as influential religious figures in their respective societies, but also as powerful practitioners of divine magic. They use this to heal and protect, or harm and weaken.

Devotion to the faiths of Azeroth leads many priests to the paths of courage and heroism. In dark times priests carry the Light of faith with them as a reminder of the powerful forces at work beyond the comprehension of the peoples who walk the land. Powerful healers with an intimate connection to the divine, priests are empowered with abilities that aid them in times of dire need.

Priests comprise quite a varied group in Azeroth. Many are followers, in some manner, of the Holy Light. Some priests choose to be pyremasters or High Priests, while some of the most experienced become epic priests. There are also racial restrictions to some titles, such as witch doctor for trolls and Priestess of the Moon for night elf females.[1]