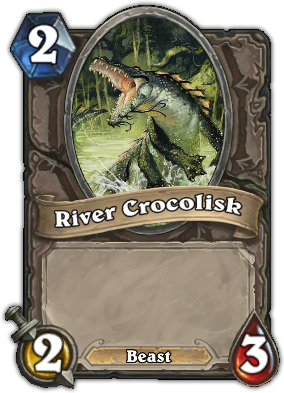 River Crocolisk is a Neutral class Minion card. It has no effect.

Like Bloodfen Raptor, River Crocolisk is a poor choice for most constructed decks, as there are many better 2 mana 3/2 and 2/3 minions in the game, such as Faerie Dragon and Bloodsail Raider. It is perhaps slightly better than Bloodfen Raptor in that there are fewer alternative 2/3 minions than 3/2 minions, but even then, with only 30 card slots in a deck, it is usually hard to justify making space for the Crocolisk. In Arena, there may be situations while drafting in which a 2 mana 2/3 is appropriate given mana curve and synergies.